NOTE:  Kim Zigfeld’s latest installment of her Russia column is up and running on Pajamas Media. It deals with the neo-Soviet persecution of Soviet dissident Alexander Podrabinek over one of his columns in Yezhedevny Zhurnal.

NOTE:  This issue is a real eye-opener on Russia.  Racism. Disease. Deep political corruption.  And, of course, the little matter of giving the A-bomb to Iran.  No reasonable person can peruse items 1-4 and not realize that Russia is a nation run amok.

EDITORIAL: The Scourge of Pandemic Russian Racism and the Cowardly Treachery of Barack Obama

According to a recent report by the BBC, nearly 60% of black people living in Russia have been physically assaulted in a racially motivated attack, and live in constant fear of such incidents.  A quarter of those surveyed by the Moscow Protestant Chaplaincy had been attacked more than once and four out of five had been verbally assaulted.

These besieged people are terrified to ride the metro, cower in their homes like prisoners on any nationalist holiday, and avoid all crowds in general.

Commenters on the BBC story told the tale:

END_OF_DOCUMENT_TOKEN_TO_BE_REPLACED

The image above, courtesy of the Moscow Times, is a photograph taken from the Moscow subway.  It shows two advertisements plastered on the wall next to each other.  The one on the left is an ad for “Domestos” cleaner, and boasts that it wipes out germs of every kind, including those that cause the dreaded Swine Flu.  It warns gravely: “Don’t economize on the health of your child!”  The one on the right comes from the Moscow City Council, and urges voters to turn out on election day, October 11th.  It advises voters that “City Council will decide how to guaranty health and safety” and that “Moscovites will decide who sits on the City Council.”

The juxtaposition is profound.

END_OF_DOCUMENT_TOKEN_TO_BE_REPLACED

Another Original LR Translation: Without Putin 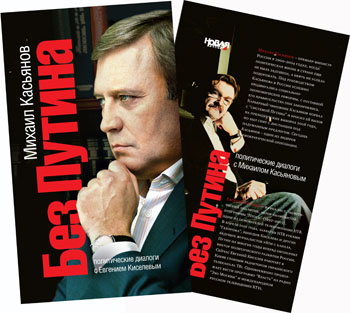 Former Russian Prime Minister Mikhail Kasyanov has a new book out entitled  Without Putin (Bez Putina) in which he carries on an extended dialogue with former NTV pundit Yevgeny Kiselyov.  Novaya Gazeta, whose publishing house is issuing the volume, has published an extended excerpt, and what follows is our staff translation (Dave Essel played no part and is not to be blamed for our errors, of which we would be pleased to be advised). If you are in Russia and want to buy the book, click here for the information.  Note that we’ve added some explanatory material [in brackets] that is not in the original text.

I.  Russia in Default

[LR:  Mikhail M. Kasyanov was deputy minister of finance from 1995 until May 1999, when he became Finance Minister.  The Ministry of Finance is analagous to the U.S. Treasury Department.   A year later he became deputy prime minister, and from May 2000 to February 2004 he was the Prime Minister of the Russian Federation under the newly-elected “President” Vladimir Putin. He is now a leading figure in the “Solidarity” opposition movement that seeks to unseat Vladimir Putin and roll back Putin’s anti-democratic crackdown.  When he sought to run for president against Dima Medvedev, his name was stricken from the ballot and he was placed under investigation for alleged electoral fraud.]

The situation at the beginning of 1998 was unusually tense.  The price of oil had dropped to 12 dollars, but the ruble was not moving down as it should have done.  In May, commenting on a report on the macroeconomic situation by the Board of the Ministry of Finance, I said what I thought was obvious:   “Listen, this means we have no choice but to urgently to devalue the ruble.”  [LR:  Kasyanov’s goal was to avoid default on Russia’s sovereign debt by increasing foreign financial flows with a discounted domestic currency.  This would, of course, heavily burden the pocketbooks of the people of the country.]  They fell on me like a pack of wolves. “How dare you make such a suggestion in the middle of a crisis!?” they shrieked.  But Oleg Vyugin, a fellow deputy finance minister, and I both insisted that an anti-crisis program be implemented immediately.  In particular, we needed a large infusion of cash from the IMF so as to buy time to implement reforms across the board in the public sector.

Why was so much precious time lost?

END_OF_DOCUMENT_TOKEN_TO_BE_REPLACED

Russia and the Iranian Bomb

The Times of London reports:

Israel’s prime minister, Binyamin Netanyahu, has handed the Kremlin a list of Russian scientists believed by the Israelis to be helping Iran to develop a nuclear warhead. He is said to have delivered the list during a mysterious visit to Moscow.

Netanyahu flew to the Russian capital with Uzi Arad, his national security adviser, last month in a private jet.  His office claimed he was in Israel, visiting a secret military establishment at the time. It later emerged that he was holding talks with Vladimir Putin, the Russian prime minister, and President Dmitry Medvedev.  “We have heard that Netanyahu came with a list and concrete evidence showing that Russians are helping the Iranians to develop a bomb,” said a source close to the Russian defence minister last week.

“That is why it was kept secret. The point is not to embarrass Moscow, rather to spur it into action.”

END_OF_DOCUMENT_TOKEN_TO_BE_REPLACED

The Double Life and Fraudulent Times of Maria Shamapova

Once again, it was all smoke and mirrors for our gal Maria.