Source:  Ellustrator. (Click the image to see it full size.  We have modified Ellustrator’s original somewhat, click the link to see the original. Our modification is suggested by one of Ellustrator’s commenters).

CARTOON: The Putin Generation at Play 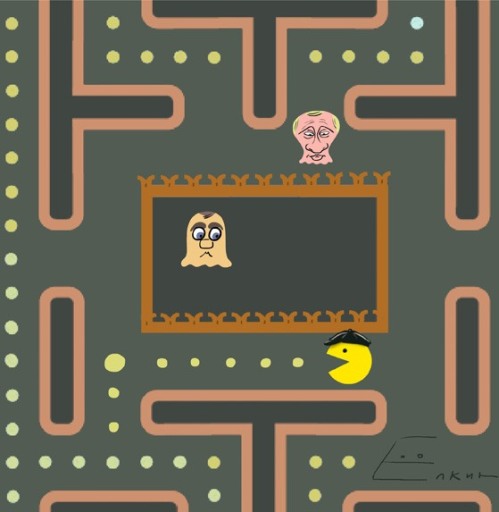 Putin doesn't need eyes. On the stick is written: "Channel One." That's the main national broadcast TV network, owned and operated by the Kremlin.

At the top is the word: “President.”

We’re huge fans of Russian political cartoonist Sergei Yelkin, otherwise known as The Ellustrator.  But even we did not dream he could surpass himself in regard to the rendition of the Russian flag as a cadre of blue-suited police officers surrounded by a sea of blood which appears at the top of our sidebar to the right.  We thought that was the greatest Russian political cartoon that would ever be drawn.

But he’s done it.  He’s set a new standard, and created the single greatest Russian cartoon yet created. It’s a very simple image, of stunning complexity and power. It shows a group of eight Russians standing under a scorching sun, holding picket signs demanding that the orb stop torturing them.