(2)  EDITORIAL:  Stalin takes One for the Team

NOTE:  The “Harry’s Place” blog exposes the frothing charade of hatred that is Russia Today.

NOTE:  The so-called “Russian Obama,” Joachim Crima, who ran under a fake Russian name for a local mayoral position in the Volgograd region, ended up with less than 5% of the vote in the October 11th ballot. 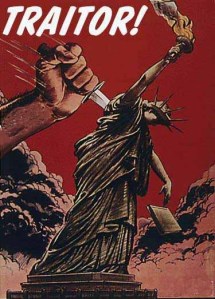 Obama stabs liberty in the back

In a blog post on October 13th, as translated by Paul Goble two days later,  Anton Orekh of the Echo of Moscow radio station declared that U.S. President Barack Obama had given up on the notion of democracy and human rights in Russia and would treat the country as a hopeless case on that score, the same as the U.S. had done to the USSR during the Cold War.

This came on the heels of a sensational story reported by the Kommersant newspaper quoting Obama’s Russia advisor Michael McFaul as saying “that the US no longer intends to teach Russia about democracy, creating tension with Moscow, and intends to concentrate on practical work with non-governmental organisations.”  Oleg Orlov of the Memorial NGO allegedly then confronted (Russian link) McFaul about the remarks, and he supposedly denied making them.

The impression made by all this rumor-mongering, which Obama himself has certainly not denied, is predictable.

END_OF_DOCUMENT_TOKEN_TO_BE_REPLACED

EDITORIAL: Stalin takes One for the Team

Stalin takes One for the Team

A lot of evidence is emerging that Stalin was the first democrat of our country.  How can a textbook prove that Stalin was a tyrant?  I’ve come here to defend Stalin, to defend him against these terrible accusations. He was a great man. He united the country and created a great superpower.

Those were the words of the Russian supporters of the greatest mass-murderer of Russians in world history, Josef Stalin, gathered outside the Basmanny District Court last week, defending their hero as his legal case for libel against the heroic Novaya Gazeta newspaper went straight into the crapper.

END_OF_DOCUMENT_TOKEN_TO_BE_REPLACED

In Putin’s Russia, the Study of History is now a Crime

A Russian historian investigating the fate of Germans imprisoned in the Soviet Union during the second world war has been arrested, in the latest apparent clampdown on historical research into the Stalin era by the Russian authorities.

Mikhail Suprun was detained last month by officers from Russia‘s security services. They searched his apartment and carried off his entire personal archive. He has now been charged with violating privacy laws and, if convicted, faces up to four years in jail.

END_OF_DOCUMENT_TOKEN_TO_BE_REPLACED

You Just Can’t Trust a Russian

Just how far is the Obama administration prepared to go in its misguided attempt to befriend the Kremlin? First, it caved in to Russian pressure and cancelled the missile defence shield planned for Eastern Europe. Now it is prepared to turn a blind eye to Moscow’s somewhat cavalier attitude to the rule of law and respect for human rights.

All these blandishments are being offered in the forlorn hope that the Russians can be persuaded to play a more constructive role in resolving the threat posed by Iran’s illicit nuclear programme. President Barack Obama has ordered his officials to pursue a more pragmatic relationship with Moscow – which last March led Hillary Clinton, his secretary of state, to make a clumsy attempt to repair relations by presenting Sergei Lavrov, her opposite number, with a joke “reset” button.

But if Mr Obama thinks that grand gestures can persuade the Russians to ditch decades of anti-American hostility, he should think again.

END_OF_DOCUMENT_TOKEN_TO_BE_REPLACED

Mailbag: A postcard from Moscow

Letters, we get letters, we get lots of cards and letters every day!  La Russophobe publishes letters to the editor from readers. If you’d like to talk back to LR’s readers, send an e-mail to larussophobe@yahoo.com and let your voice be heard.  Here’s a recent example from our mailbag we thought you’d like to see:

I just discovered your blog, and absolutely LOVED IT!!!

I am a Russian-American, who grew up in the US and have been living in Moscow for the past year (husband’s job). I sometimes put on RT when I am in the mood to become even more disgusted with this place.

Yesterday, I caught this low-life, Peter Lavelle, on his show.  WOW!!!  This is a special kind of a-hole.