As Vladimir Putin is apparently preparing to return to the Presidential seat in 2012, PR campaign in his support is gaining strength sometimes almost reaching the level of cult of personality. On October 6, a day before Putin’s 59th birthday, he got an unusual gift from several female students of Moscow State University’s Department of Journalism. Twelve soon-to-be journalists in sexy lingerie posed for a calendar entitled “Happy Birthday, Mr. Putin!” Next to their smiling photos were put slogans like “How About a Third Time?”, “Who Else If Not You?”, “You Are Only Getting Better with Years” etc. Names of the girls and their department were mentioned at every page.

Make no mistake, it wasn’t a joke or a spontaneous burst of patriotism of a few not-so-smart girls.

END_OF_DOCUMENT_TOKEN_TO_BE_REPLACED 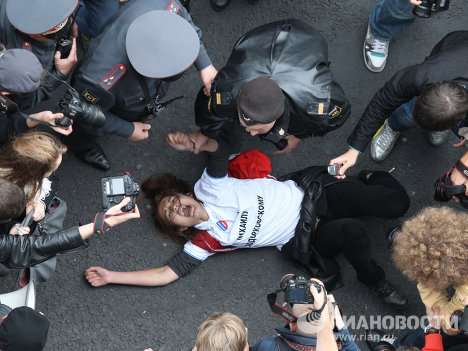 Oleg Kozlovsky, writing on the Huffington Post, reveals how Vladimir Putin has declared open, violent war against peaceful protesters (just for daring to march without a license, not for defying an order to disperse) and his own presidency-for-life:

Today’s Kommersant publishes a fresh interview with Vladimir Putin, where the dictator comments on opposition rallies:

Look, all our opponents support a Rechtsstaat. What is a Rechtsstaat? It is obedience to the existing law. What does the existing law say about [Dissenters’] Marches? You need to get a permission from the authorities. Got it? Go and protest. Otherwise you don’t have this right. If you go out without having the right, get beaned with a baton. That’s it!

Putin manages to lie three times in this short passage:

END_OF_DOCUMENT_TOKEN_TO_BE_REPLACED

Russian opposition leader Oleg Kozlovsky's stunning wife Lada Bat with their daughter Dana, who is appearing at her very first protest event with her parents. If this is Russia's future, things are not so very bad after all.

Heroic opposition leader Oleg Kozlovsky (click his name in our sidebar “categories” section to read all about him) reports the the Kremlin is escalating his persecution to a shocking new neo-Soviet level:

When one speaks of advantages of the Putin’s regime over the Soviet system, there usually is one achievement that is never disputed. It is the freedom of travel abroad. In the USSR, very few people were able to visit the Soviet Bloc countries, and only a tiny minority could see the “capitalist world.” But after the USSR collapsed, Russia opened its borders, removed numerous obstacles for international travel, and millions of Russians could travel the world. After Putin came to power most of the freedoms we had enjoyed were reduced or eliminated, but this one was left almost untouched.

For me, this freedom seems to be over. Yesterday, I was informed that FSB is refusing to give their approval for re-issuing of my passport. The official reason is, they failed to receive information about whether I had access to any state secrets during my military service (which I, of course, hadn’t). Ironically, I was drafted into the army two years ago with direct involvement of FSB when they tried to isolate me during the presidential campaign. Now, they use it as an pretext for not letting me out the country.

END_OF_DOCUMENT_TOKEN_TO_BE_REPLACED

Yabloko throws in the Towel

Yabloko, which had claimed to be the last registered democratic party in Russia, has officially broke up with the opposition. Its convention adopted a resolution last week that bans Yabloko’s members from participating in any opposition organizations, movements or coalitions.

Kremlin’s most hated “troublemakers” like The Other Russia and Solidarnost are explicitly mentioned in the resolution. Those who don’t leave these organizations within three months will be automatically expelled from the party, regardless if they hold high posts.

END_OF_DOCUMENT_TOKEN_TO_BE_REPLACED

On November 4th 2008, the world watched Barack Obama win the US presidential elections. The first black person to rule the planet’s most powerful country, he promised to change those policies of the previous administration that were seen by many as undemocratic. On the next day, another recently elected President was presenting his plans to the public. Dmitry Medvedev was addressing the Russian Parliament and he too was speaking on the broad topics of democracy and the rule of law. But he did make a very practical point in his speech when he suggested amending the Constitution and extending the terms of both the President and the State Duma (the lower House of the Parliament). This amendment was supported by Prime Minister Vladimir Putin, who had until recently before claimed that the Constitution must not be changed. Parliament passed the resolution in a matter of weeks with hardly any discussion. This amendment to the Constitution, its first, was a clear example of what democracy in Russia had become.

END_OF_DOCUMENT_TOKEN_TO_BE_REPLACED

That Oleg Kozlovsky is one cool dude, and he has married a fabulous babe. Some postcards from his wedding album. Chew on these, Mr. Putin:  Jail him illegally as many times as you like, he just goes on.

Going to the chapel and they're gonna get married!

END_OF_DOCUMENT_TOKEN_TO_BE_REPLACED

Some people accuse us of hating Russians, but in fact all the people we most idolize are Russians.  We simply hate those who try to destroy those Russians, and the Russians who try to do are the most reprehensible of the lot.

On May 31, 2009, the Oborona opposition organization led by Oleg Kozlovsky carried out a protest march on Tverskaya Street in Moscow.  The march was a response to Moscow City Hall’s illegal refusal to certify a rally at the city’s Triumphal Square in response to a legal application for permission to do so by the Other Russia coalition led by Garry Kasparov, of which Oborona is a part.

Oborona activists lit flares and unfurled banners calling for Putin to resign; they sought to block traffic on Tverskaya just as unpaid workers recently did in Pikalyovo outside of St. Petersburg.  They were immediately attacked by OMON storm troopers and 30 members were arrested, including Kozlovsky himself.

After the jump, view photographs of the Oborona activists, including a young woman of rare beauty, being manhandled by the OMON thugs. We ask you:  Who are the patriots, and who the traitors to Russia?

END_OF_DOCUMENT_TOKEN_TO_BE_REPLACED

Oleg Kozlovsky, leader of the Oborona protest movement, writing on the Huffington Post:

Some countries are just more lucky than others. Moldova wasn’t lucky enough to be known in America or Western Europe. Indeed, it’s a small East-European ex-Soviet country, poorest on the continent, and there’s little of interest about it. Except maybe for the fact that Moldova is the only place in the world where Communists keep winning West-approved elections. So they did, or claim to have done, at general elections last Sunday.

END_OF_DOCUMENT_TOKEN_TO_BE_REPLACED

It would be hard not to find this amusing, if it were not so very horrifying.  Oleg Kozlovsky reports on his blog about the truly amazing, chicken-with-the-head-off incompetence of Russia’s police establishment, who are far more dangerous to Russian citizens than the nation’s criminal element:

Yesterday, myself and two other activists of Oborona were arrested at a small action at the Moscow State University, my alma mater. We called students to participate in the Dissenters’ Day, which was planned for March 12th. We had leaflets, a loudspeaker and a flag. The police arrested three of us and took us into custody. Initially, they charged us with “a violation of the rules for conducting a public action,” which meant that we could be held in the custody for up to three hours and then be fined up to 1000 roubles (about $30).

END_OF_DOCUMENT_TOKEN_TO_BE_REPLACED

Translator’s Note: What I find most interesting about this story of dirty little infiltrations and attempts at dirty little tricks against the opposition is how pathetically inept, empty and ignorant the Kremlin’s little hirelings are. Being somewhat older myself, I have not had much contact with young Russians who grew up entirely after the collapse of Communism and the USSR. Looking at the vacuousness and sloppiness of the thinking (if there is any thinking done at all) here and the total deficit of any morals whatsoever, it is clear that the education system collapsed as well. Aren’t these vacuous little hirelings neat miniatures of the supreme Lilliput (in Michael Saakashvili’s wonderful allusion)?

The Petersburg Branch of Oborona has uncovered a number of paid infiltrators working to the order of a secret project called Runners of the President. This project was set up by the pro-Kremlin Nashi movement and has been operating for the last 18 months. Its particular purpose was to collect information on opposition groups and to set them up for provocations during demos. The infiltrators engaged in the latter activity have unfortunately not yet been uncovered. We know that spies of this kind have been infiltrated into other organisations in Petersburg and other towns around Russia.

The paid informers infiltrated into the Petersburg Branch of Oborona, who received about 20000 roubles a month (~$550), were Vladimir Bynkin, who joined Oborona in July 2008 and became a member of the St. Petersburg Branch coordination committee, and Taras Filatov, an activist recruited by Bynkin in December. We also discovered that prior to these people joining, Darya Odintsova, who earlier left the Runners of the President project and ceased being active in Oborona, had also been a paid infiltrator. The three have now been officially expelled from Oborona at a General Meeting of the organisation.

END_OF_DOCUMENT_TOKEN_TO_BE_REPLACED

The Horror of Russian Barbarism, Unbound

Oleg Kozlovsky’s blog tells us that United Russia recently added the following graphic to the their website, then after an outcry in the Russian blogosphere removed it. Check out the parking lot area in the left middle of the large circle in the center, then click the image or the jump to see it larger.  But first, gird your loins, and remember: This is the official party of power in Russia, and this is their official website. 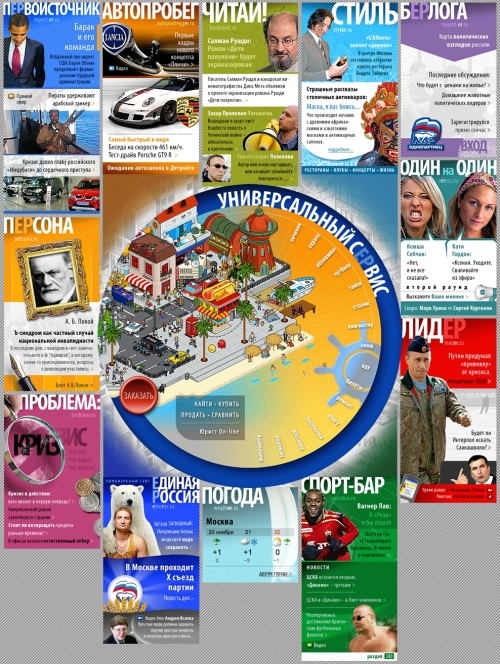