Earlier this week we linked to a piece from Alex Rodriguez, one of the best Russia journalists in the world, from his paper the Chicago Tribune.  Rodriguez recited a litany of incidents of the Kremlin cracking down on journalists who dared to use the word “crisis” in describing Russia’s current economic picture.  One incident Rodriguez described was as follows: “Russia’s business daily, Vedomosti, received a warning from Russian authorities after it published an article by economist Yevgeny Gontmakher that discussed the potential in Russia for unrest spurred by the economic crisis.”

Now Robert Amsterdam has translated Gontmakher’s article. It follows. Hero journalist Grigori Pasko has his own take on these events, also on Amsterdam’s blog.

I’m not going to pretend I’ve got my very own version of «Day of the Oprichnik». Vladimir Sorokin — he’s a professional writer, who has already managed to do this brilliantly. I’ve got another genre: I would like to attempt to model a situation that may with ever greater probability be realized somewhere in the depths of Russia already in the nearest future. There can be many concrete causes: from an attempt by the local powers to save money on people (by the way, just a few days ago, people blocked off the main street in Barnaul several times, protesting against an attempt to monetize city benefits) to heating interruptions in the upcoming winter. But the economic crisis, into which Russia is sinking ever deeper, hints at new story lines as well.

END_OF_DOCUMENT_TOKEN_TO_BE_REPLACED

The Other Russia translates a shocking bit of journalism from the Russian press.  Russia is defiling the sacred memory of the 9/11 tragedy with sick, perverted propaganda on state-controlled television. How would Russians like it if America returned the favor with similar broadcasts about Beslan and Dubrovka?  Here again is yet another heroic Russian willing to stand up for truth and sanity, risking all to do so. These are the Russians we adore, the country’s last, best hope.

“Zero: an investigation into 9/11,” a film by Italian journalist Giulietta Chiesa and his French colleague Thierry Meyssan, went practically unnoticed in the world. Its authors openly complained about this as they spoke on Channel One, hinting at machinations by America’s intelligence agencies. In Russia, on the other hand, the film was shown on TV on Friday evening, during prime-time – on the “Private Screening” program, which gave it an audience of many millions. In and of itself, this proves that the Cold War is in full swing, at least on Russian television. Mr. Chiesa laments that “the level of democracy in the world is very low. And with every year, it becomes lower and lower.” And that’s why the Italian departed for Russia in search of genuine democracy.

END_OF_DOCUMENT_TOKEN_TO_BE_REPLACED

Annals of the Neo-Soviet Media Crackdown 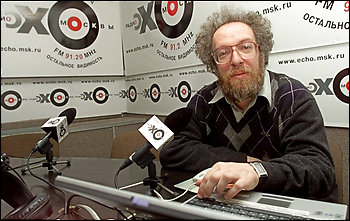 Alexei Venediktov, chief editor of Echo Moskvy radio, was berated in front of his peers by the prime minister for his coverage of the Georgia war. (By Alexander Zemlianichenko -- Associated Press)

By e-mail a reader tips us to the following item in the Washington Post (the New Yorker also has extensive coverage of the radio station in question):

At the height of the crisis over Russia’s invasion of Georgia last month, Prime Minister Vladimir Putin summoned the top executives of his nation’s most influential newspapers and broadcasters to a private meeting in the Black Sea resort of Sochi.

The Kremlin controls much of the Russian media, and Putin occasionally meets with friendly groups of senior journalists to answer questions and guide news coverage. On Aug. 29, though, for the first time in five years, he also invited the editor in chief of Echo Moskvy, the only national radio station that routinely broadcasts opposition voices.

For several minutes, according to people who attended the session or were briefed about it, Putin berated the editor in front of his peers, criticizing Echo’s coverage of the war with Georgia and reading from a dossier of transcripts to point out what he considered errors. “I’m not interested in who said these things,” one participant quoted Putin telling the editor, Alexei Venediktov. “You are responsible for everything that goes on at the radio station. I don’t know who they are, but I know who you are.”

The message to the 30 or so media executives at the gathering was clear: With Russia occupying parts of Georgia and locked in perhaps its most serious conflict with the West since the Cold War, they should be especially vigilant against reporting anything that the government might find objectionable.

END_OF_DOCUMENT_TOKEN_TO_BE_REPLACED

The Moscow Times reports that Vladimir Putin doesn’t have as much guts as George Bush, and can’t handle being teased on TV. What a wimp!

So rare is it to hear anything but fawning praise for Prime Minister Vladimir Putin on national television that the mere mention of his name in a less-than-flattering context can put television hosts and producers on the edge of a nervous breakdown. Such was the case on a recent evening on state-owned Rossia television, one of the Kremlin’s more servile media outlets.

END_OF_DOCUMENT_TOKEN_TO_BE_REPLACED

Robert Amsterdam’s blog does not get nearly enough credit for their translations into English from languages other than Russian.  Following is his translation from the German of a web posting on neo-Soviet propaganda, which was carried out at our urging. But for the blogosphere, this kind of thing would never see the light of day in English; the item was cited by us last week for its revelation regarding the mistreatment of Russia Today reporter William Dunbar.

The fight for the right of interpretation between Russia and Georgia has broken into a full-fledged battle. It is taking place parallel to the fights on all channels – on television, in newspapers and especially in the Internet.

A familiar, almost hackneyed, quote: “When war breaks out the first victim is the truth”. Yet this insight from US Senator Hiram Johnson of 91 years ago applies for 2008 as well: For five days there was fighting in Georgia and the situation was unclear, more than anything. It is difficult for journalists to confirm statements made by the warring parties and have them verified by independent positions. The hardliners in Russia and Georgia are fighting to influence the opinions in the rest of the world.

An example: Russia’s ambassador in Georgia spread the message that 1500 people died as a result of the Georgian attacks on Tskhinvali in the first night of the war. It took days for aid organizations to gain an overview. A representative from the human rights organization Human Rights Watch mentioned around 200 wounded in the area of Tskhinvali in the Frankfurter Rundschau. No one knows the actual number of deaths, but it is most likely significantly lower than what the Russian side has been saying. The objective was reached; the numbers made their rounds for days, were reported and, so they hope, are now fixed in people’s minds.

END_OF_DOCUMENT_TOKEN_TO_BE_REPLACED

Special Extra — Russia Today Censors Reporter for Not Towing the Kremlin Line, he Resigns in Protest

The Frankfurter Rundschau newspaper has reported an interesting case involving the news channel Russia Today (RT). Its correspondent in Tbilisi, the Briton William Dunbar, mentioned last Saturday in a live broadcast that Russian aircraft were outside of South Ossetia and involved in an attack on the town of Gori, noting that Russian bombs had hit civilian houses.  As a result, RT ceased live satellite broadcasts and the 25-year-old Dunbar resigned in protest, telling the newspaper: “The facts did not fit with what Russia Today wanted to broadcast.”

Commenter “Simona” helped correct our translation and points us to Media Network, which quotes Dunbar saying: “I felt that I had no choice but to resign.” He said that he was reporting the facts, but that “the real facts of the matter didn’t conform to what they were trying to report, and therefore they wouldn’t let me report it.”

END_OF_DOCUMENT_TOKEN_TO_BE_REPLACED

Russian TV is Lying to the People of Russia

Russian Television, the most influential media channel in that country, has so distorted what is taking place in Georgia in the course of its “construction” of reality there that Russians who want to know what is really happening have been forced to turn to the Internet or, as during the Cold War, to Western broadcasters such as Radio Liberty.

In an analysis which was posted on Fontanka.ru, media critic Sergey Ilchenko observes that “facts, especially in our days, do not exist on the television screen ‘in a pure form,’ separate from interpretation and commentary” as Russian TV’s approach to Georgia has clearly demonstrated over the last five days. Catastrophes and conflicts, he points out, are “constructed” by television whose editors and reporters “ever more frequently appear in the role of directors of reality,” as the movie “Wagging the Dog” and Russian coverage of the war in Georgia show to the satisfaction of anyone who cares to pay attention.