NOTE:  If any reader versed in Photoshopping (this particular talent eludes us) would like to whip up picture of Winnie the Pooh and Vladimir Putin sporting swastikas, we’d be only too pleased to commit a Russian crime by displaying it on this blog. Please forward by e-mail or publish in a comment to this post.

NOTE:  The Wall Street Journal has an item remembering the 50th anniversary of the famous “kitchen debate” between the U.S. and the USSR.

For a country that claims to be the victim of radical Islamic terrorism, Russia is amazingly willing to support such terrorists as long as they are inflicting their horrors on other countries:  Two Internet sources, DEBKAfile and Joseph Fara’s G2 Bulletin, are reporting the discovery of close links between Vladimir Putin’s KGB and the Hezbollah terrorist organization.

END_OF_DOCUMENT_TOKEN_TO_BE_REPLACED 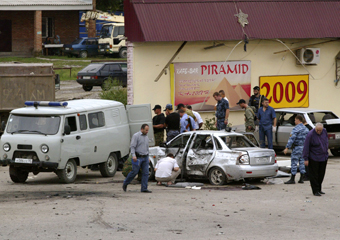 One of the bicycle bomb scenes in "pacified" Grozny last week, courtesy of the Moscow Times

Last Friday, a pair of bombings swept through the Chechen capital of Grozny while the streets were full of people eating their lunch.  Each bombing was carried out by a suicide attacker on a bicycle riding up to a police checkpoint.  Four more police officers were killed, making a total of sixteen over the course of a week.  Add to that the massive car bombing in Nazran, Ingushetia which killed two dozen and injured well over a hundred, and you have a clear picture of apocalypse in Russia.

And that was only the beginning.  The same day that the cyclists were doing their bloody work in Grozny, something even more terrifying happened.

END_OF_DOCUMENT_TOKEN_TO_BE_REPLACED

On the Island of Sakhalin

Translated from the Russian by François Guillaumat

While our greedy authorities, hungry for other country’s territories, passionately cling to some stolen Japanese islands, tiny pebbles in the ocean, the inhabitants of another island, a large and undoubtedly Russian one, are busy collecting signatures.

I received a call from a certain local democrat. His name, address and appearance, I will not reveal for anything, lest some terrorist in Guantanamo Bay remember that said democrat, many years ago, equipped for their last mission the Boeings which crashed into the twin towers.

END_OF_DOCUMENT_TOKEN_TO_BE_REPLACED

In 1918, the Soviet Union became the first country to promise universal “cradle-to-grave” healthcare coverage, to be accomplished through the complete socialization of medicine. The “right to health” became a “constitutional right” of Soviet citizens. The proclaimed advantages of this system were that it would “reduce costs” and eliminate the “waste” that stemmed from “unnecessary duplication and parallelism” — i.e., competition.

These goals were similar to the ones declared by Mr. Obama and Ms. Pelosi — attractive and humane goals of universal coverage and low costs. What’s not to like?