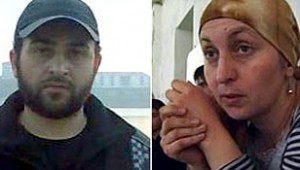 A young couple newly married couple barely into their twenties, Zarema Sadulayeva and her husband Alik Djabrailov (pictured, left), both just 33 years old, were abducted by law enforcement authorities in Chechnya on Monday and found shot and stuffed into the trunk of a car on Tuesday.  When human rights leaders complained to the authorities, they were told there had been no kidnapping, and later that the two had gone off voluntarily with law enforcement for questioning.

She was the leader of a small human rights NGO called “Save the Generations” which worked closely with UNICEF to protect Chechen children from land mines and other horrors.  This placed them, like all other human rights workers in Chechnya, in direct confrontation with a government that does not want to acknowledge any human rights abuses of any kind, and views those who reveal them as traitors to be executed. The horrifying double murder comes immediately after the leader of Chechnya, Ramzan Kadyrov, publicly declared that the last victim of such assassination, Natalia Estemirova, had no conscience or honor.  Kadyrov has been decorated for heroism by the Russian government.

No thinking person now can question the role of the Russian government in these killings.  It is time for President Barack Obama to end his craven silence and sanction Russia for these outrages.

NOTE: Reader “Robert” has lots of excellent follow-up links in the comments section of this post. Don’t miss them.