(2)  EDITORIAL:  The Perils of Plastinina

(5)  A Word of Warning to Barack Obama

NOTE: Our mailbag post today (#3) emaphasizes the critical role being played by our publisher in the fight for democracy in Vladimir Putin’s Russia in the blogosphere. All three letters respond directly to Kim Zigfeld. One responds to a post she wrote back in the formative days of this blog when she was going it largely alone; a second responds to a comment of hers on Robert Coalson’s blog, and the third responds to her letter to the editor of the Washington Post. You go KZ!

On Thursday, the Russian gas monopoly Gazprom cut off gas supplies to Ukraine when it demanded a price rise to $250/1,000 cubic meters and Ukraine offered only $200.  Gazprom also wants to collect half a billion dollars in fines for late payment.

On Friday, crude oil prices jumped nearly 4% to just over $46/barrel.  Traders worried that decreases in gas flow to Ukraine could undermine the flow of gas to Europe, creating scarcities.

Why, it was almost as if Russia wanted to disturb the gas market and drive up prices artificially due to a panic.  Why would it want to do an outrageous thing like that, bordering on terrorism?  For one thing, as it is now the Kremlin has frittered away half its cash reserves defending the ruble and the stock market from plummting world oil prices.  As the Wall Street Journal has reported:  “Natural gas prices tend to follow oil prices with a six- to nine-month lag: With crude down more than $100 since reaching a record high of $147 a barrel in July, gas prices are expected to fall steeply next year.” So another big shock is in Russia’s future, and it needs to scrape together all the cash it can in hopes of avoiding bankruptcy.

And if a few million people in Urkaine have to freeze, so be it.  Careful though, Russia. One day soon you may yourself be standing in Ukraine’s felt boots and asking the West for help.  When that day comes, we will remember your behavior towards Ukraine.

END_OF_DOCUMENT_TOKEN_TO_BE_REPLACED

EDITORIAL: The Perils of Plastinina

On New Year’s Eve, teenage Russian fashion designer Kira Plastinina headed to bankruptcy court in New York City and closed four of her six fashion boutiques in Southern California.  Her website began offering 75% off super sales.  Her fifteen minutes of fame were up, and her comically trashy “designs” were about to become dishrags. 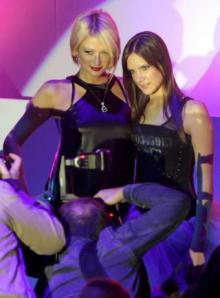 One day you're bff with Paris, the next day not so much

Her millionaire father Sergei (amusingly* also referred to as “Plastinina” on Kira’s Wikipedia page, like calling Guy Richie “Mr. Madonna”), CEO of the giant and bizarrely named Wimm Bill Dann dairy concern, who bankrolled her Potemkin fashion empire,  is of no use to her now. There’s nothing for it but to call in the lawyers.

The Americans just aren’t buying it any more.

Kira only entered the American market six months ago, arrogantly proclaiming her intention to soon be operating 250 retail outlets across the country, and now she’s already looking to skip out on her massive debts and flee the country.   She only managed to actually open a dozen shops before her spectacular flameout.

So the bloom has come off yet another Russian rose. Her consolation, according to the Los Angeles Times, is that at least “she still has a sizable fan base in Russia, Ukraine and Kazakhstan, where she has dozens of stores.”  Being on the fashion market in those countries is roughly like being in the ballet business in Boise.  Maybe best not to brag about it too loudly.

After all, Vladimir Putin still has a considerable  base in those countries, doesn’t he?  For how long, though, is anybody’s guess, and it’s not too likely he’d be embraced by LA voters.

END_OF_DOCUMENT_TOKEN_TO_BE_REPLACED

I noticed Kim Zigfeld’s comment on an RFE/RL article on Robert Coalson’s new blog concerning the illusion of Putin’s popularity. It kind of reminds me of an incident in which I found myself in Scotland back in ’03. I was managing a performing arts venue (where I hosted a Belarusian theatre company performing proudly in their own language!!!), and it was my job to close up the place for the night. Just as I was at the last stage, locking the gate, I saw an abusive man shoving his clearly beleaguered girlfriend into a wrought-iron fence surrounding our venue.

END_OF_DOCUMENT_TOKEN_TO_BE_REPLACED

Masha Lipman of the Carnegie Center, writing in the Washington Post:

Uncertainty is creeping up on Russia. For the first time since Vladimir Putin’s rise to power, Moscow confronts the prospect of real political instability. One of Russia’s savviest politicians, Anatoly Chubais, said last month that the likelihood of serious turmoil — economic, social and even political — is 50 percent.

The current crisis is global, and there is no sure way to forecast its length or depth. Such uncertainty would be disturbing in any country but is especially alarming here. For years, Putin steadily eliminated all political threats to his power, and by the end of his second term as president he enjoyed absolute authority. Now that authority is being challenged by forces beyond his control.

END_OF_DOCUMENT_TOKEN_TO_BE_REPLACED

Posted in halls of power, russia

A Word of Warning to Barack Obama

The always-brilliant Leon Aron of the American Enterprise Institute, writing in the Wall Street Journal, has some words of warning about Russia for the President Elect:

Russia faces a particularly nasty version of the global recession (at a minimum), and perhaps an economic “perfect storm.” Regardless of how bad its economy gets, two broad political trends, each carrying profound implications for Russia’s foreign policy and U.S.-Russian relations, are bound to emerge.

The first will be a growing dissatisfaction with the government, which may lead to a political crisis. The second will be a reactionary retrenchment: increased internal repression and more of its already troubling foreign policy. Managing the relationship with Moscow in the face of these trends is something President-elect Barack Obama and his administration should start thinking about now.

END_OF_DOCUMENT_TOKEN_TO_BE_REPLACED

— Mikhail Delyagin, director of the Moscow-based Institute for Globalization Studies.

Radio Free Europe reports on the Russian year in review:

From its historic victory against Canada in the world ice hockey championships to skyrocketing oil revenues and growing international muscle, Russia spent at least the first half of the year the way it likes — a winner on all fronts. The signs were auspicious as early as January 2, 2008, when world oil prices passed the $100-a-barrel mark for the first time.

In energy-rich Russia, where the economy depends almost exclusively on resources, a single $1 rise in oil prices can translate into $1 billion in extra revenues a day. So by July, when prices hit their peak at $147 a barrel, Moscow appeared unstoppable. It continued its revenue-fueled advance through Europe and Asia, buying up billions in energy holdings. The EU’s failure to progress with its plans for the Nabucco pipeline allowed Russia to inch closer to a monopoly on natural-gas shipments to Europe via its proposed South Stream and Nord Stream pipelines.

Moscow also remained the foreign-policy bully, delighting in the failure of Georgia and Ukraine to advance further in their NATO membership bids, and maintaining a fighting stance over Washington’s Central European missile-defense plans. The Kremlin even pulled off a potentially tricky political transition that moved Vladimir Putin from the presidency to the premiership with no apparent loss of power or public affection. His presidential replacement, Dmitry Medvedev, proved a competent but unremarkable successor who appeared content to stay in Putin’s shadow.

Paul Quinn-Judge, a Russia expert with the International Crisis Group, describes the first seven months of the year as a heady combination of “hubris and oil.”