(1)  EDITORIAL:  Whither Chichivarikin, whither Russia?

(5)  Russia’s Military Destroys itself from the Inside Out

NOTE: Opposition activists plan to hold a day of protest on January 31st, which they have declared a “Day of Dissent.” Watch a pair of Oborona activists hang a banner with that declaration on a bridge in Moscow over at Oleg Kozlovsky’s website.  Remember, these kids are risking their careers and indeed their lives to work for a better future for their country. Awesome.

EDITORIAL: Whither Chichivarkin, whither Russia? 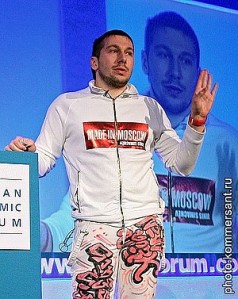 In May 2005, Business Week magazine ran a feature on a young Russian businessman named Yevgeny Chichivarkin.  It reported that while ten years prior Chichivarkin had only a small business “selling clothing and cigarettes at the bustling Luzhniki market in western Moscow” by 2005 he was the co-owner of the third-largest cellphone retailer in Russia, with annual sales approaching $1 billion.  BW opined:  “These young mobile millionaires prove that you don’t have to be a government-made oligarch to succeed in Russia. With a growing middle class, the country offers ample opportunity for entrepreneurs to tap unfilled retail niches.”

Less than a year later, his firm was the #1 retailer and he had won Ernst & Young’s Russian Retailer of the Year Award.  Known for his eccentric clothing and a red Porsche with the license “666” as well as being fined for using profanity in his company’s advertisements, the Moscow Times called him “no ordinary businessman.” Later in 2006, Time magazine reported: “In a corner of his Moscow office, perched beneath a painting of a businessman fondling his half-naked secretary, is an open silver attaché case containing wads of U.S. $100 bills in packs of $10,000. It’s meant as a joke, poking fun at perceptions of Russian businessmen as big-spending bandits.”

By 2007, the eccentric bloom was coming off the notorious rose.  Even though it now had nearly $5 billion in annual sales, over 5,000 branches nearly 40,000 employees, his company had slipped back down to the #3 position in the Russian market.  But Chichivarkin was still full of bluster.  He told Newsweek magazine:  “This country has never seen a company like ours. I have 37,000 employees, and I don’t want to run them the way Russian companies used to manage people. I have a simple logic—make money and teach the person next to you how to make money.”

Alas, for all his bravado the story of Mr. Chichivarkin had soon become all too familiar in the annals of Russian business.

END_OF_DOCUMENT_TOKEN_TO_BE_REPLACED

In a stunning report from Reuters last weekend, we learned that “the number of unemployed Russians rose to 6 million in December compared to 5 million in November as an economic downturn hit home” according to the head of the Russian federal employment service, one Yuri Gertsiy, who was speaking on Echo of Moscow radio.  That’s a startling increase in unemployment of 20% in just one month.  The figure is four times higher than the number of Russians who have registered with the state as being unemployed six months into the national financial crisis, showing that such records are utterly meaningless in evaluating the nation’s employment rate.

END_OF_DOCUMENT_TOKEN_TO_BE_REPLACED

Stanislav Markelov was buried in Moscow Friday, Jan. 23. A well-known lawyer and human rights advocate, he was murdered Jan. 19, not far from the Kremlin. His killer also mortally wounded Anastasia Baburina, a journalist for the newspaper Novaya Gazeta. The 25-year-old Baburina, who had been walking alongside Markelov, died in the hospital several hours after the shooting.

Novaya Gazeta, where Baburina worked, has lost many of its leading lights in recent years. Among them was Anna Politkovskaya, who had written about human rights violations in Chechnya; she was shot. Another probable victim was Yuri Shchekochikhin, who was poisoned. He had written about a corruption scandal involving high-ranking officials in the security services.

The double murder of Markelov and Baburina comes as yet another dreadful confirmation that to be a human rights advocate, or an investigative journalist without Kremlin sanction, is equivalent to a death sentence in today’s Russia.

END_OF_DOCUMENT_TOKEN_TO_BE_REPLACED

Anthony Julius, writing on the Guardian’s “Comment is Free” blog:

As President Obama contemplates his foreign policy inheritance, it is likely that he will ponder most deeply two topics – the continuing threat posed by al-Qaida, and Russia, or what has become known as the war on terror and what was once known as the cold war. What he is unlikely to do, however, is to identify any connection between the two threats. But that would be unfortunate, not least because the men who lead them, notwithstanding the many differences between them, have identical perspectives on one specific issue.

What is that issue? Bin Laden’s and Putin’s imperialist ambitions are novel because they are driven not by a desire to create something new, but to recapture something that has past. It is now appropriate to consider an additional age of empire, namely the age of attempted restoration.

END_OF_DOCUMENT_TOKEN_TO_BE_REPLACED

Russia’s Military Destroys Itself from the Inside Out

The army has been hit with a strange illness. Hundreds of new conscripts have contracted pneumonia almost simultaneously in both ends of the country — in Kaliningrad and Siberia. Official statistics show that only 100 soldiers fell ill in each place, but human rights activists claim that the number is much higher — so high that whole army barracks had to be turned into on-site hospitals. One of the conscripts, Anton Yumatov, who was a law school graduate, died.

The army reacted to the crisis in a typical fashion — by denying that the epidemic even existed. Later, the Military Prosecutor’s Office was forced to admit that there were violations of “the safety requirements for military service and, in particular, violations of disease-control regulations in the soldiers’ barracks.”