You said it, sister!

Mr. Putin and his Sense of Humor 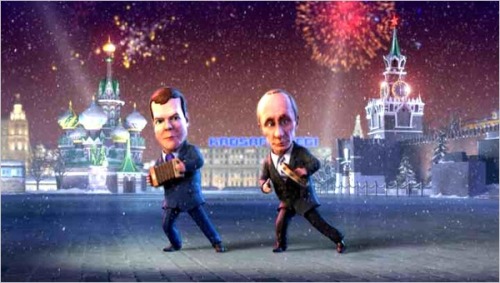 It is not, from a purely technical standpoint, impossible to make fun of Vladimir V. Putin. His head is shaped a bit like a light bulb, with eyes that are heavy-lidded, as if to convey that he has just been reading your dossier. He has a needle nose, a prizefighter’s swagger and a fondness for posing shirtless. If all else fails, there is always the matter of height.

But caricatures of the Russian prime minister long ago vanished from state-controlled television. Ten years ago, the creators of the show “Kukly” came under such pressure from the Kremlin to retire their grotesque puppet of Mr. Putin that they responded, rather sardonically, by depicting him as a burning bush. The show was eventually canceled, and caution has prevailed since then. A talk show, “Real Politics,” included Mr. Putin in cartoons, but he was seen only from the neck down.

END_OF_DOCUMENT_TOKEN_TO_BE_REPLACED

The Real Dimitri Medvedev, Part I: Another Original LR Translation by our Original Translator

The above Russian-language parody of the way Dimitri Medvedev was selected to be the next “President” of Russia uses a re-dubbed scene from the classic 1966 film, “Prisoner of the Caucaus, or the New Adventures of Shurik” (Кавказская пленница, или Новые приключения Шурика) – a movie that every Russian in the world knows practically by heart. The parody appears to have become wildly popular on the RuNet, with nearly 800,000 views to date.

Wikipedia gives the following good summary of the original movie:

A kind, yet naïve, student named Shurik (Demyanenko) goes to a place in the Caucasus to learn the ancient customs of the locals. He falls in love with a girl called Nina (Varley), but her uncle (Mkrtchyan) sells her as a bride without her knowledge and arranges to have her kidnapped by an eccentric trio: Coward, Fool and Experienced. After a failed attempt, the uncle decides to trick Shurik into helping with the kidnapping – telling him that it is a traditional custom and that it was Nina’s own wish. Shurik goes through with the kidnapping, and does not figure out what has really happened at first, but with the help of a friend he manages to rescue Nina from her captors.

“Dmitriy Medvedev: How it all Began” uses the scene from this movie in which the uncle tricks Shurik into helping with the kidnapping – telling him that Putin himself has selected him to participate in the “traditional custom” of a Russian election – as one of the candidates for President! The Coward, the Fool and the Experienced (characters similar to the Three Stooges) are introduced as Zhirinovskiy, Zyuganov and Bogdanov – the three phony “presidential candidates” that Shurik/Medvedev will face in the “election”.

Uncle (introducing himself and sitting down at table): “Mr. Medvedev? You’re a very lucky man! You wanted to observe ancient Russian customs? This one will be in March. And you won’t just get to see it, you’ll be able to participate as well!”

Medvedev: “Thank you so much! And what is this ancient custom called?”

Uncle: “Presidential Elections. Not real elections, basically like in Belarus, but custom requires that the President be elected.”

Medvedev: “A beautiful custom! But what will my role be?”

Uncle: “You’ll gather signatures, register your candidacy… and then the people will elect – guess who?”

Uncle: “No, no – they’ll elect YOU. From a group of other candidates.”

Medvedev: “Ahh – so there are other candidates, too.”

Uncle: “Yes, as required by tradition. Incidentally, there they’re over there. Let me introduce them to you.” (The three “candidates” approach.) “From left to right: Zhirinovksiy, Zyuganov and… oh, I always forget his name… ah yes – Bogdanov!”

Zhirinovskiy (says nothing, just slaps Medvedev’s hand and salutes him)

The candidates take their seats at the table, followed by a long, awkward silence…

Uncle (lowering his voice in an aside to Medvedev): “They don’t stand a chance, of course…” Then, smiling at all of them: “But they’re okay with that.”

Medvedev: “What did he say?”

Uncle: “He says that all the time. Don’t pay any attention to him.”

Zyuganov: “We’re going to bomb them – in America!”

Medvedev: “What did he say?”

Medvedev (laughing): “A joke, fine. Well, I agree. So who’s going to be the Prime Minister?”

Uncle: “They worship him.”

Medvedev (now looking very scared, pauses, then laughs artificially): “I completely forgot, in March I have to, um…. well, basically, I can’t do it. No way.”

Uncle (very serious): “Mr. Medvedev… Putin specifically asked for you to do this.”

Medvedev: “Putin himself asked for me?”

Medvedev (holds his head in his hands, depressed, then looks up): “Well, what can one do? Tell Putin I agree. Goodbye.” (Gets up from the table to leave.)

Uncle (following Medvedev out, through the now-dancing restaurant): “Listen. Custom demands that everything appear completely natural. Your competitors will fight you tooth and nail, complain endlessly… But you can’t pay any attention. This is all part of a beautiful, ancient tradition.”

Medvedev: “I understand. Don’t worry. Everything will look completely natural. See you at the elections.”

Uncle: “See you at the elections.”

Thanks for reading La Russophobe !

Posted on October 21, 2007 | Leave a comment
Dschinghis Khan‘s “Moskau” with subtitles stating what it sounds (weirdly) like in English. Hat tip: Sovok.

Thanks for reading La Russophobe !