The BBC reports on yet more evidence of Vladimir Putin’s total policy failure in the Caucasus region: 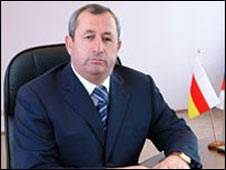 The mayor of the capital of Russia’s North Ossetia region has been assassinated by unknown gunmen.  Vitaly Karayev died from gunshot wounds in hospital after he was attacked in Vladikavkaz on Wednesday morning.  Police have sealed off the area and say that a murder investigation is now under way.

The scene of the crime

The southern Russian region, like neighbouring Ingushetia and Chechnya, has suffered sporadic violence from militant groups in recent months.  Mr Karayev, aged 46, was shot at about 0900 local time (0600 GMT), as he was leaving his home in a car, officials say. He suffered several bullet wounds and later died in Vladikavkaz’s hospital.  Some reports in the Russian media say the mayor could have been killed by a sniper.

Earlier this month, 12 people were killed in what officials believe was an attack by a female suicide bomber in Vladikavkaz.  North Ossetia was the scene of the Beslan school siege in 2004, in which pro-Chechen militants seized schoolchildren and teachers. It ended with the death of more than 300 people after a bungled assault by Russian troops.  North Ossetia has tense relations with neighbouring Ingushetia, that stem from an outbreak of sectarian violence in the 1990s.  Ingushetia itself suffers almost daily shoot-outs and explosions.

The Georgian breakaway region of South Ossetia – scene of a brief war between Russia and Georgia in August – also borders on North Ossetia. Thousands of Russian troops remain in South Ossetia.

Islamist militants in the volatile North Caucasus on Thursday claimed responsibility for the assassination of the mayor of the North Ossetian capital, Vladikavkaz, according to the Kavkaz Center rebel web site. Vladikavkaz Mayor Vitaly Karayev was struck in the heart by a single bullet Wednesday morning in an apparent sniper attack near his home in the southern city, and he died later in the hospital.

In a statement posted Thursday on the Islamist rebel web site Kavkazcenter.com, a group called the Kataib al-Khoul, also known as the Ossetian Jamaat, said one of its senior leaders shot and killed Karayev as he stepped into his silver Mercedes at about 9 a.m. Wednesday. The statement said Karayev was killed because he ordered a crackdown in Vladikavkaz on women wearing traditional Muslim garb in the wake of the Nov. 6 attack by a female suicide bomber in the city that left 12 people dead.  The militants denied that Islamist rebels based in North Ossetia were linked to that bombing, saying they had never planned or executed attacks on civilians, with the exception of “informers and those who are openly hostile to the religion of Allah.”

Kataib al-Khoul was first mentioned on the Kavkaz Center web site in March 2006. The site describes the group as an Ossetian unit of a broad network of Islamist militants battling Moscow for control over the North Caucasus.  Since then, the group has claimed responsibility for the slayings of several officials in North Ossetia, a predominantly Christian republic in the largely Muslim North Caucasus.  North Ossetian President Taimuraz Mamsurov had said Wednesday that he did not believe that Karayev’s murder was connected to Islamist rebels.

This entry was posted in chechnya, russia and tagged ingushetia, russia. Bookmark the permalink.