Russia and its Pathetic Education Fraud 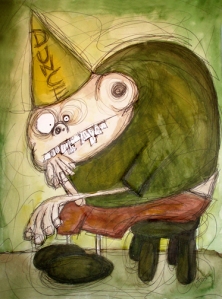 Three weeks ago, NTV television reported that more than 70 engineers working at a Komsomolsk-on-Amur airplane factory in the Khabarovsk region had obtained fake engineering degrees from a local technical college. The high-security military plant, which belongs to state-owned Sukhoi, assembles the Su-27, Su-30 and Su-35 fighter jets, as well as the much-anticipated Superjet 100 passenger plane. The trade in fake diplomas is nothing new, of course, but the sheer number of employees involved was mind-boggling.

Sukhoi management took a nonchalant attitude toward the scandal and refused to fire the employees, referring to a company rule that employees can be dismissed only for “grave crimes.” (According to the Criminal Code, knowingly purchasing a fake diploma carries a maximum punishment of an 80,000 ruble [$2,600] fine and two years of “correctional labor.”) Sukhoi management also explained that the diplomas were a mere formality since the engineers had been employed at the plant for years and assured that no engineers with fake diplomas had been employed in actual plane production.

This is a classic case of self-deception. Sukhoi pretended that it had “raised worker qualifications” by instantly turning dozens of employees with only a high school education into engineers with college degrees. Until they got caught, everyone seemingly gained from the scheme. The plant reported to Sukhoi headquarters in Moscow that it fulfilled its plan for the number of degree-holding engineers on staff, the workers received a small bonus for their new skill level, and everyone pretended that they were making better airplanes.

END_OF_DOCUMENT_TOKEN_TO_BE_REPLACED

At the Paris Air Show last week, Russia’s Sukhoi  aircraft manufacturing concern was able to secure only a pathetic total of three orders for its new “Superjet-100” model, upon which the company has pinned all its future hopes.  Looking below the surface, we see that the whole business was nothing but a pathetic charade, a classic Russian Potemkin village carried out to paper over the fact that there is, in the words of aeronautics experts “nothing new” about Russia’s plane.  In fact, there were no legitimate offers at all for the Russian crate.  Given Russia’s horrific record of air disasters, that’s hardly surprising.