Behind President Dmitry Medvedev’s superficial and meaningless words of “modernization” and “freedom is better than a lack of freedom,” Russia continues its repression of opposition members, human rights activists and independent journalists. A good example of how Medvedev’s “modernization and freedom” is flourishing can be found in the republic of Altai, a picturesque, mountainous region in West Siberia. Criminal charges were filed by Altai Governor Alexander Berdnikov against Sergei Mikhailov, editor-in-chief of the local Listok newspaper, for its critical articles against Berdnikov and other bureaucrats in his administration.

END_OF_DOCUMENT_TOKEN_TO_BE_REPLACED 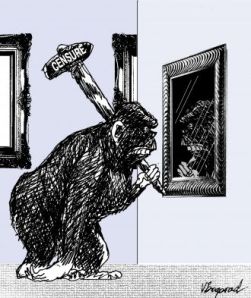 Russia as a nation of apes

After art curator Andrei Yerofeyev was convicted last week by Moscow’s Tagansky District Court of inciting religious hatred with his 2007 “Forbidden Art” exhibit, he said, “We did not lose. … It was the country that lost because the country has denounced its own art.” Much worse, however, the judge and prosecutor in the case showed the state’s clear affinity for the reactionary, extremist forces in Russia who are demanding strict censorship in arts and education. What’s more, the position taken by law enforcement agencies and courts violated the country’s basic constitutional guarantee of freedom of expression.

The criminal case against Yerofeyev and his associate Yury Samodurov were filed by outspoken conservative State Duma Deputy Alexander Chuyev and various religious groups and private individuals. The court ruled that Yerofeyev and Samodurov’s exhibit, which featured artwork depicting Jesus as Mickey Mouse and Lenin, violated Article 282 of the Criminal Code, which prohibits “the incitement of national, racial or religious enmity and the abasement of human dignity based on religious affiliation.” As a result, the court fined Samodurov 200,000 rubles ($6,500) and Yerofeyev 150,000 rubles ($4,900).

END_OF_DOCUMENT_TOKEN_TO_BE_REPLACED

The Hopeless Failure of Medvedevinomics

The modernization rhetoric of President Dmitry Medvedev, who recently marked his two-year anniversary in office, has had no impact on everyday life in Russia. We can say for sure that the country has entered a period of stagnation, a term inextricably linked to the sclerotic era of former Soviet leader Leonid Brezhnev. Much like the dreary 1970s, time has stopped under the leadership of Medvedev and Prime Minister Vladimir Putin. The political landscape in Russia today has become frightfully similar to the Soviet Union. United Russia is looking and acting more like the Communist Party of the Soviet Union and, not surprisingly, Russia’s economic development has halted and fallen into decline.

END_OF_DOCUMENT_TOKEN_TO_BE_REPLACED

Gleb Pavlovsky, a longtime Kremlin insider and pundit, hit the nail on the head when he described the pervasive corruption among Russia’s bureaucrats: “For the last 20 years, no one in the high levels of government has discussed whether this or that top bureaucrat abuses his official position for personal gain. It is taken as a given. They are all corrupt.”

That is why Russia — unlike China, Singapore, Japan and France — has not prosecuted a single high-ranking official on corruption charges in the entire 20 years of the post-Soviet period. The government’s whole “fight against corruption” boils down to nothing but empty speeches, useless anti-corruption legislation, amusing but meaningless “strategies” to combat the problem and occasional arrests on corruption charges of middle- and low-ranking officials — scapegoats who have no impact on solving the larger, systemic problem of corruption in government.

While the economy was growing in the 2000s thanks to high energy prices and business expansion fueled by a seemingly endless flow of cheap corporate credit, there was another boom taking place in Russia — the sharp rise in the number of bureaucrats since Vladimir Putin became president in 2000.

END_OF_DOCUMENT_TOKEN_TO_BE_REPLACED

“Innovation City” nothing but another Potemkin Fraud

Several high-ranking officials were quick to dismiss the proposals put forward in a much-discussed report by the Institute of Contemporary Development, the liberal Moscow-based think tank. The report suggests that Russia can modernize only if it develops a strategy for invigorating and strengthening state and social institutions. Proposals include the need for democratic control over state bureaucracy and siloviki agencies, an independent judiciary, political competition and direct elections for the Federation Council and governors.

Although Medvedev is the institute’s chairman of the board of trustees, he said he didn’t read the report, although he received it well in advance of its release Feb. 3. And, at an economics forum in Krasnoyarsk on Feb. 12 and 13, Deputy Prime Minister Igor Shuvalov quipped that the government already has enough qualified economic and political specialists on staff that it doesn’t need a lot of outside advice.

END_OF_DOCUMENT_TOKEN_TO_BE_REPLACED

Last week we carried Vladimir Ryzkhov’s essay in the Moscow Times condeming the Kremlin’s efforts to rewrite Russian history.  His next column continued the drumbeat of warning:

The only way to fight a real battle against the falsification of history — something that President Dmitry Medvedev has made a priority after creating a special commission to handle this issue — is to keep government archives as open as possible for historians. Unfortunately, the government is doing the exact opposite, depriving historians access to the most sensitive and important historical documents. Among other things, this is a violation of the Constitution.