Annals of the Neo-Soviet Police State

Aleksandr Podrabinek knows a creeping police state when he sees one.

As a Soviet-era dissident he was a member of the Moscow Helsinki Group human rights organization, editor of the samizdat journal “The Chronicle of Current Events,” and the author of a 1977 book, “Punitive Medicine,” that chronicled the abuses of the psychiatric profession against political prisoners. He was exiled to Siberia for criticizing the Soviet authorities in the 1970s and sent to a labor camp in the 1980s for distributing forbidden literature.

In a recent two-part series of articles published in the online magazine “Yezhednevnyi zhurnal,” Podrabinek connects the dots and argues that the soft-authoritarian regime established by Vladimir Putin over the past decade is about to be transformed into something much harsher.

END_OF_DOCUMENT_TOKEN_TO_BE_REPLACED

Back to the USSR 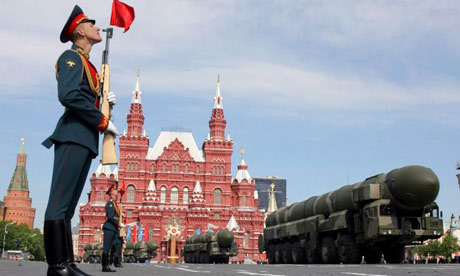 Everything old is new again . . . and we told you so long ago!

We noted in an editorial on Friday that this blog, once accused of extremism, is now mainstream conventional wisdom on Russia.  As if to confirm us, one of the world’s leading Russia correspondents, Luke Harding of the Guardian, lays out the horrifying facts in a manner no thinking person can dispute, saying things we’ve been saying (and predicting) since April 2006:

Tanks rolling into neighbouring countries, the media back under state control and Kremlin policy shrouded in secrecy … Luke Harding reports on why Russia seems hellbent on reverting to its Soviet past

The first thing you come across after hanging up your coat is Yuri Andropov, the former Soviet leader and KGB boss. A large white bust of Andropov adorns the lobby. Next to him, just up the stairs, is a portrait of another KGB protege who went on to bigger things, Vladimir Putin. (Putin is wearing his famous judo outfit. He looks terrific, relaxed. His hands rest lightly, almost pertly, on his hips.)