EDITORIAL: The Voice of Russia(n Lies)

The Voice of Russia(n Lies) 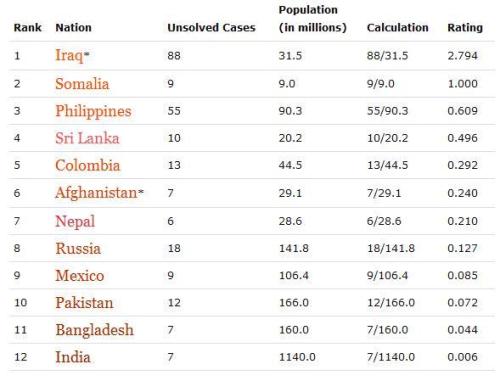 The chart above, prepared by the Committee to Protect Journalists, shows that only two nations on this planet, Iraq and Philippines, have more unsolved murders of journalists than does Vladimir Putin’s Russia, which ranks #3 in the world in nominal and #8 in the world in per capita butchery of members of the press.  Russia’s rate of savagery in this regard is 50% higher than Mexico’s, which comes in just below it at #9, and it has twice as many unsolved murders as does Mexico.  Russia moved from #9 last year to #8 this year.  Amazingly, with little room to do so, it’s getting even worse as time goes by.

But you would never know this from reading or listening to the “Voice of Russia,” the Kremlin’s own paid propaganda network. It is one of the very worst, most unreliable and dishonest sources of information about modern Russia in the world.  Because of outrageously dishonest reporting from the likes of VOR, Russians and Russophiles have a warped, distorted, neo-Soviet view of themselves and, like the infamous Emperor with his “new clothes,” fail to realize that in reality the entire world is appalled by them.

Look, for example, at the shameless lies VOR told about the recent visit to Moscow by human rights delegations from the United Nations and the European Union.