Even as Russian “president” Dima Medvedev was meeting with Barack Obama in London in an effort to “press the reset button” on U.S.-Russian relations, Medvedev’s cruel KGB regime showed by its actions that the effort was nothing more than a sham.  Obama remains silent on the issue of human rights and the new cold war with Russia, giving every indication that he has been suckered by the neo-Soviet regime in Moscow, and it is now time for Republican John McCain to speak up in vehement opposition.

We understand that McCain was honor bound to give Obama the chance to formulate his policy towards the KGB regime of Vladimir Putin without interference, but three months have now passed and Obama has met with his Russian “counterpart,” yet remained totally silent on American values and national security where Russia is concerned. Therefore, McCain must now demand better.  And let’s be clear:  It’s not only the right thing, but in his party’s partisan interests, to do so.  Republicans have lost the intiative on domestic policy but, following the lead of their great leader Ronald Reagan, they can claim the high ground on foreign policy by moving decisively against Putin.

The evidence of Putin’s malignant intentions is damning indeed.

END_OF_DOCUMENT_TOKEN_TO_BE_REPLACED

Seeing as how we have heartily endorsed McCain-Palin in this November’s presidential election, we feel it is our duty from time to time between then and now to publish a brief post in support of the cause.  We begin today with this:  Joe Biden is a moron, and we can prove it.

END_OF_DOCUMENT_TOKEN_TO_BE_REPLACED 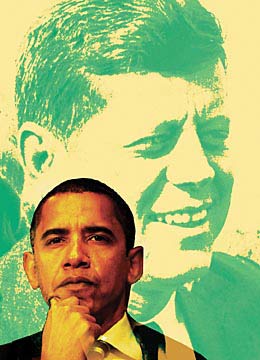 In 2004, George Bush defeated John Kerry by a margin of 3 million votes.  In 1988, his father defeated Michael Dukakis by 7 million votes.  But in 1960, John Kennedy defeated Richard Nixon by just 112,000 votes, one of the narrowest margins of victory in American presidential history.  Unlike both Bushes, Kennedy failed to take a majority of the popular vote.

Quite possibly, the American people were onto something.  Though he was a good speaker with a Harvard education — just like Barack Obama — Kennedy had virtually no actual qualifications to hold executive power — again, quite similar to Obama.  It should have surprised nobody, then, when Kennedy’s presidency turned out to be a disaster.

He failed in the prime directive, staying alive for four years.  He shamelessly cheated on his wife, one of the most beloved figures in U.S. history, with cheap bimbos who had mafia connections even as he just as shamelessly used Jackie to leverage his power.  He was addicted to painkiller medication and frequently conducted official business while impaired by them, hiding this addiction from the country.  On his orders American military forces became involved in their two greatest humiliations, the Bay of Pigs and Vietnam.  His vice president, chosen for crass political reasons, who turned out to be even less suited than Kennedy to hold executive power, took Vietnam from the frying pan to the fire and as a result became the only sitting president in history denied a second elected term by his own party.  The Vietnam war cost more than 58,000 American lives.  U.S. casualties in Iraq haven’t even reached 10% of that figure, and Iraq was a far more advanced military power than Vietnam ever dreamed of being.

There are some hopelessly ignorant fools who think, though, that Kennedy redeemed himself during the famous “Cuban missile crisis” in which Russia was discovered placing ICBMs in Castro’s dictatorship.  In fact, this was yet another Kennedy disgrace, one we think it’s necessary to remember this election season.