Relations between Cold War-era foes Moscow and Washington have long been distrustful, hypocritical, peppered with mutual insinuations and patched together with the most tenuous of threads. But now, on the eve of State Duma and presidential elections, an inevitable crisis in relations is nearing that threatens to tear them apart at the seams.

Last week, a group of 15 U.S. senators formally introduced a bill targeting Russians for human rights violations and corruption, including 60 officials connected to the jail death of Hermitage lawyer Sergei Magnitsky. The bill would ban them from entering the United States and freeze any U.S.-based assets.

END_OF_DOCUMENT_TOKEN_TO_BE_REPLACED

EDITORIAL: The Vice President of the United States is a Moron

The Vice President of the United States is a Moron 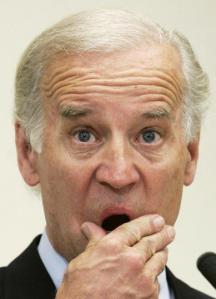 It’s pretty darned hilarious how members of the Democratic Party lampooned the last Republican candidate for Vice President of the United States, Sarah Palin, for being a buffoon then turned around and elected to that office a person who gives new meaning to the word moron.

At a recent meeting with Russian dictator Vladimir Putin, the current U.S. Veep Joe Biden was asked by the Russian psychopath whether it wouldn’t be a good idea to let Russians waltz into the United States without visas.  First Biden said “good idea!” then he said “Mr. Prime Minister, in case you haven’t noticed, there’s a real difference between being president and vice president.”

Only Joe Biden could cram so much utter stupidity into such a small space. He makes Sarah Palin look like Winston Churchill.

It’s actually hard to list all the ways Biden’s foolish utterance is wrong.

END_OF_DOCUMENT_TOKEN_TO_BE_REPLACED

I think we vastly underestimate the hand that we hold.  [The Russians have] a shrinking population base, they have a withering economy, they have a banking sector and structure that is not likely to be able to withstand the next 15 years, they’re in a situation where the world is changing before them and they’re clinging to something in the past that is not sustainable.

–  U.S. Vice President Joe Biden, in an interview with the Wall Street Journal

Those words might just as easily have been written by this blog, but they were said by the Vice President of the United States instead — and that’s encouraging.

END_OF_DOCUMENT_TOKEN_TO_BE_REPLACED 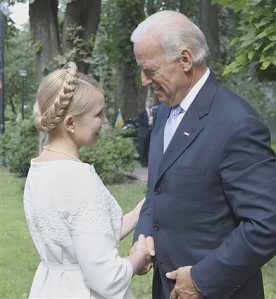 Visiting Ukraine and Georiga last week, U.S. Vice President Joe Biden (shown at left meeting with Ukrainian Prime Minister Yulia Tymoshenko) had some tough words for Vladimir Putin:  “As we reset the relationship with Russia, we reaffirm our commitment to an independent Ukraine, and we recognize no sphere of influence or no ability of any other nation to veto the choices an independent nation make.”   He told the people of these two besieged nations something they’ve been waiting too long to hear, that America sends “an unequivocal, clear message to all who will listen and some who don’t want to listen, that America stands with you and will continue to stand.” And he said that Russia “used a pretext” to invade Georgia