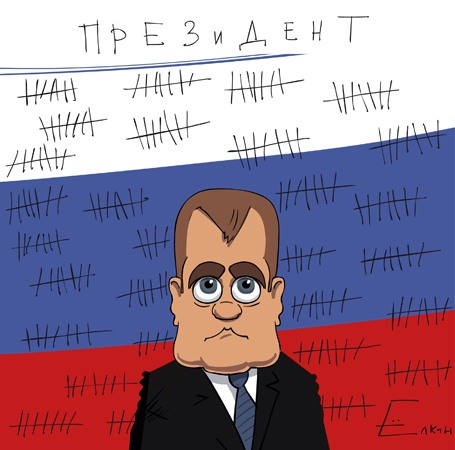 At the top is the word: “President.”

Bono and Shevhuk, Defiance in Moscow

The New Zealand Herald reports that the Russians have once again humiliated themselves before the eyes of a slack-jawed world:

Irish super group U2’s first Russia concert was marred Thursday after police detained rights campaigners at the jam-packed venue and tore down tents to prevent them gathering signatures for petitions.

Some 75,000 fans flocked to Wednesday evening’s showpiece in a Moscow stadium which came the day after U2 frontman Bono held talks with rock-loving President Dmitry Medvedev on issues including preventing the spread of polio and HIV.

Bono praised Medvedev as “gracious” in front of the crowd but also as a finale invited Russian rock star Yury Shevchuk – famous for his outbursts against the Kremlin – to the stage for a duet.