In Russia, they can’t even Pick a Mascot on the Up and Up

Mascot of the Monarch’s Will
Russia has one voter
February 28, 2011
Gazeta.ru
Translated from the Russian by The Other Russia

The nationally televised election for mascot of the Winter Olympics in Sochi became a telling model for Russian elections in general and a possible repetition in the upcoming Duma and presidential elections.

The elections aired on Channel One for Russians to choose the mascot for the 2014 Winter Olympics in Sochi bore an entirely predictable result, albeit one that directly contradicted the population’s opinion. The winner was the snow leopard, with 28% of the vote. This only happened because Vladimir Putin, while in Sochi, spoke out in favor of the snow leopard right on the day of voting. It’s true that the Olympics had to be split between three mascots, since not one received more than half of the vote – the polar bear (18%) and bunny (16%) were added to the leopard.

END_OF_DOCUMENT_TOKEN_TO_BE_REPLACED

The world must stop the Sochi 2014 madness. Now. 34 dead and 170 injured Russians today, tomorrow they will be foreign athletes and sports fans unless the world acts now. (Note:  The blast occurred at 4:30 pm on Monday January 24th.  As of 7 pm, two and a half hours later, state-sponsored Russian TV had reported nothing about the blast.  This is how the Russian government responds to risks to public safety, and how it will continue to respond.) 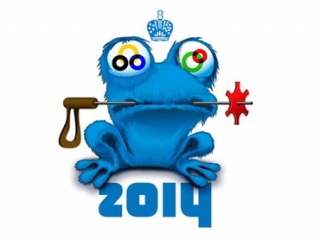 Meet Zoich, the drunken blue frog who gets our vote for the perfect Olympics mascot for Russia in 2014.  The only improvement we’d suggest is that there should be a ticking time bomb labled “Chechnya” right behind him.

EDITORIAL: Blood on the Olympic Snows of Sochi?

Blood on the Olympic Snows of Sochi?

Last week in the city of Vladikavkaz, capital of North Ossetia and just 250 short miles from Sochi where the 2014 Winter Olympics are to be held, a bomb exploded in a marketplace, injuring at least 173 people.  Seventeen people, and the suicide bomber who triggered the blast, were killed.  Rioting followed, and even more were killed.