Yet another international survey, yet another laughable, failing, third-world score for Vladimir Putin’s Russia.

This time, it was roads.

According to the World Economic Forum, Russia’s rank among world nations for quality of roads is a shocking #124.  The Moscow Times reports that  “data published by the World Bank suggests that Putin did not prioritize road construction during his rule, with spending on roads falling to 1.5 percent in 2009, compared with 3.5 percent spent by China, from 2.8 percent of GDP in 2000.”

This is just one more example of the absolute failure of leadership by the Putin regime.  While Putin has ignored Russia’s roads and spent money on cold-war provocation (and personal graft for his network of palaces), Russians have continued to favor him with sky-high approval ratings in polls.  As such, Russians get exactly the roads they deserve.

END_OF_DOCUMENT_TOKEN_TO_BE_REPLACED

Grani.ru is currently carrying a short article about the start of a new high-speed train service between St. Petersburg and Nizhny Novgorod. This made me curious as I didn’t think Russia had any fast trains. (Not that it is that fast: it covers the 1100 kilometres in 8 hours 25 minutes, which is 129 kph or 80 mph. European high speed trains do 300 kph.)

Grani goes on to say that the train, called the Sapsan, is a joint venture between Russian Railways and Siemens under which Russia is buying 8 trains for 276 million Euro. As this sounded more like a purchase contract than a joint venture, my curiosity was sparked and I followed up on Russian Wikipedia.

END_OF_DOCUMENT_TOKEN_TO_BE_REPLACED

Can you imagine dear reader, do you dare, what a road is like that does not meet Russian standards? Paul Goble reports on the catastrophic failure of the Putin regime to maintain Russia’s crumbling road network:

Even as Prime Minister Vladimir Putin again promises to complete a trans-Russia highway and as Moscow media report progress on several high-profile road projects near the capital, including paid highways, the country’s road system in many parts of the country is near the point of collapse, officials say.

They point to two reasons for that conclusion. On the one hand, according to a report in Irkutsk’s Argumenty I Fakty, the number of cars and trucks using the roads is growing rapidly, putting pressure on highways that were not designed to carry either the number or weight of vehicles now passing over them every day.

And on the other, officials responsible for roads say, the amount of money available for keeping the roads in good repair has been declining each year, a trend that in domino fashion means that Russia will eventually have to spend even more to bring the highway system back even to the level it was at a decade or more ago.

END_OF_DOCUMENT_TOKEN_TO_BE_REPLACED

EDITORIAL: Russia is a Nation of Barbarians

Russia is a Nation of Barbarians

In our comments section below, a YouTube video is displayed.  Take care before you view it, it isn’t for the squeamish.

In it, a Russian driver in the city of Irkutsk plows into a group of pedestrians, seriously injuring them.

The driver’s airbags deploy and the driver is uninjured, while the car is heavily damaged.

The driver gets out of the car . . . and the only thing she’s interested in doing is checking out the damage to her precious vehicle.

No other drivers stop to help.

Pedestrians walk right by.  None of them stop to help either.

No criminal charges were filed against the driver.

Russia is a nation of barbarians. 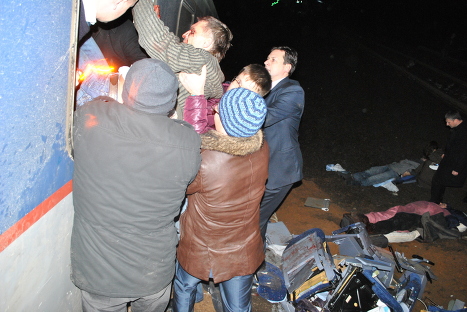 Passengers evacuating other passengers, official rescuers nowhere to be seen

There was nothing we could do to help the injured. There was no doctor, no first-aid kit on board the train. It seems like there wasn’t anything to provide even the most basic assistance. There weren’t even any torches to look for the injured with. A lot of time valuable time was lost, time that could have been used to save people. The apparent absence of first-aid kits on such a train was simply unbelievable, especially in the light of the 2007 blast. No one even thought to have reserves of bandages.”

When a terrorist bomb exploded underneath a high-speed train halfway between Moscow and St. Petersburg on Saturday night, once again the greatest damage to Russia was not the loss of life, horrible as it was, but the humiliating light cast on Russia’s reckless indifference to the welfare of its citizens.

END_OF_DOCUMENT_TOKEN_TO_BE_REPLACED

Is Russia “driven” to Revolution?

Every society has a breaking point. In Boston it was the tea tax; in France it was Marie Antoinette’s wigs. If you’re curious where the breaking point may lie in Russia, try slamming the door as you get out of a taxicab — even the most rickety Soviet-era Lada. What will pass across the driver’s face is an expression of such exquisite suffering that you will first apologize and then run. Russians love their cars.

END_OF_DOCUMENT_TOKEN_TO_BE_REPLACED 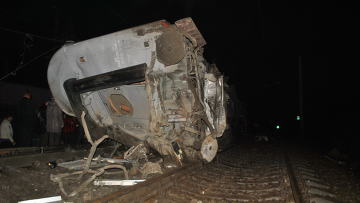 What used to be the Nevsky Express

At 9:30 pm Moscow time on Saturday, the Nevsky Express high-speed train bound from Moscow for St. Petersburg derailed.   Three hours later, the Kremlin’s RIA Novosti newswire reported 10 passengers had been killed and 130 injured. But five hours after that, RIA was reporting that two dozen had been killed only 90 injured, and indicating that “the death toll could rise as new bodies were being taken out of the deformed railroad cars.”  32 passengers were reported missing. Nearly 700 people were on the train.  By the following afternoon, it was clear that more than three dozen had perished, triple the initial a report.

Quoting an anonymous source in “law enforcement,” RIA Novosti also reported on the cause of the derailment:  “Preliminarily, an explosion occurred under the ninth car,” it stated. “There was a clap. The last two cars almost fell apart. I’ve seen such things only in movies,” a passenger named Alexander told the newswire.

Once again, Russia rescue efforts were pathetic and infuriating.