Just as he worked to disband Russia’s forest protection service, the consequences of which have now become all too obvious, Vladimir Putin is seeking the liquidation of the federal agency responsible for ensuring that Russian laws protecting historical and cultural monuments are observed, an action that may have equally far-reaching effects.

The proximate cause of this latest action, Kommersant suggested, was the opposition of Rosokhankultura, the agency’s Russian acronym, to the construction of the 403-meter Okhta Center for Gazprom in St. Petersburg, a project Putin supports but that most preservations argue would destroy the integrity of the North Capital’s landscape. But beyond that, Putin’s latest move, just like his destruction of the forest protection service five years ago, reflects his desire to promote business development at any cost and to push out of the way experts and activists who raise questions about the impact of what he and the Russian powers that be want to do.

END_OF_DOCUMENT_TOKEN_TO_BE_REPLACED

Since so many predictions about the future are negative, few people want to wait around to see whether they come true. Perhaps that is why the Russian authorities and society prefer to ignore information about impending problems. When the world began speaking about global warming, no countries in Europe treated the topic as lightly as we did. Russia believed that it was all much ado about nothing, a fabricated crisis invented by the West or leftist environmentalists.

Moscow’s responses were: 1. There is no climate crisis; 2. Humanity and the existing economic system are not responsible for it; 3. The crisis in no way affects Russia; and 4. Even if it does exist, it can only be to Russia’s benefit.

Not only did Russia make no attempt to help solve the global environmental crisis, it did everything to exacerbate the problem on its own territory.

END_OF_DOCUMENT_TOKEN_TO_BE_REPLACED

“Why the [expletive] do we need an innovation center in Skolkovo if we don’t have common firefighting vehicles?”

Since the first wildfires started a month ago, 125,000 hectares of Russia’s forest have been destroyed in 17 regions, and 40 people have died.

END_OF_DOCUMENT_TOKEN_TO_BE_REPLACED

The Moscow Times reports (watch a video of the arrest described on YouTube):

Moscow region police flexed their muscle Wednesday in the conflict over the Khimki forest, detaining anti-deforestation campaign leader Yevgenia Chirikova in downtown Moscow in front of dozens of reporters.

Meanwhile, a Moscow region court has approved the arrest of two suspects in a daring attack last week on Khimki City Hall, despite what supporters said was shaky evidence against them.

Part of the Khimki forest is being cleared to make way for an $8 billion highway connecting Moscow and St. Petersburg. Opponents of the project say the highway could be built around the woods.

“Ten riot police officers grabbed me and dragged me away,” Chirikova said by phone after her questioning ended.

She had been speaking at the Independent Press Center, not far from the Kropotkinskaya metro station.

END_OF_DOCUMENT_TOKEN_TO_BE_REPLACED

As Moscow’s record heatwave began, I threw open all the screenless windows in my apartment, hoping for some breeze — but mostly what I got was visits from bugs and, briefly, an inquisitive crow. Then, tendrils of the acrid smoke from the peat-bog fires surrounding the city wafted in, bringing nausea and dry-mouth.

The recommendation of Russia’s top doctor to hang wet sheets at the windows to block the smoke just makes the rooms more stifling. With no end in sight to the misery, another doctor’s advice may be the only one thing that brings relief — think as little as possible. In my 11 years in Moscow, the most frequent question from friends abroad has been “Aren’t the winters tough?” Maybe so. But Russians handle winter with aplomb — fur hats, afternoons in steamy bathhouses, long evenings gulping warming vodka around the table in toasty kitchens.

The country’s not geared for summer, however.

END_OF_DOCUMENT_TOKEN_TO_BE_REPLACED

EDITORIAL: In Russia’s Tuapse, a Rising

In Tuapse, a Rising

Maybe, just maybe, when the story of the demise of Vladimir Putin and Dmitri Medvedev is written, the story will begin:  “It all started in Tuapse.”

This utterly charming hamlet by the sea (if you’ve not been, you should) rose defiantly to spit in the eye of Putin and Medvedev once again last week.  After the jump, photographs from the scene tell the tale better than any words could do.

More than two thousand brave Russian citizens poured into the streets, heedless of the Kremlin’s threats and its jackbooted thugs called “policeman” and demanded that their government stop killing them, slowing poisoning their environment with toxic chemicals as if their lives did not matter.

One protester declared:  “We address those troublemakers and environmental racketeers and those who sponsor them: Stop causing a nightmare for our terminal!  Think about where your children and grandchildren will work, and whether life be sufficient for all of us”

We can’t help but wonder:  How long before the same happens in Sochi?

END_OF_DOCUMENT_TOKEN_TO_BE_REPLACED 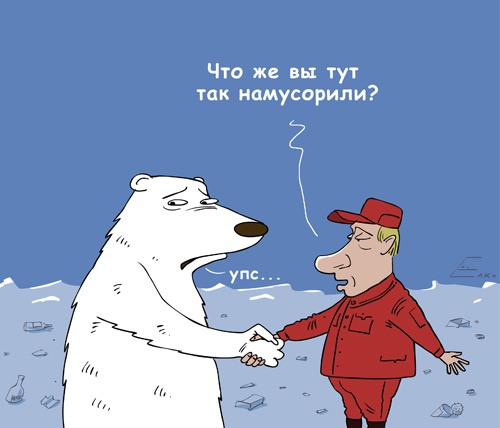 Explanatory news item here (Ellustrator is saying Putin might as well ask the bears to do it).