Reader “Robert” directs us to a BBC web page which compares the performance of the nations in post-Soviet space on economics, health and democracy. It provides three charts which reveal shocking facts about the failure of Putin’s resource-rich Russia when compared with tiny Estonia, the leader of the group.

First comes economics, which reveals not one but three stunning insights about Russia:

The chart shows Estonia has consistently out-performed Putin’s Russia.  It also shows that even at Russia’s lowest point, 1998, it was still well above the regional average, meaning that when Russians complain they needed to impose dictatorship because of their unusual suffering they are simply lying.   Many countries were worse off than Russia at that time, but they didn’t turn to the secret police.  And finally, it clearly shows that Russia’s rebound begin in 1998, two years before Putin took the reins of power as president, under Yeltsin.

Chart number two shows that Russian life expectancy lags far behind the group average, and that compared to Estonians Russians hardly live at all. 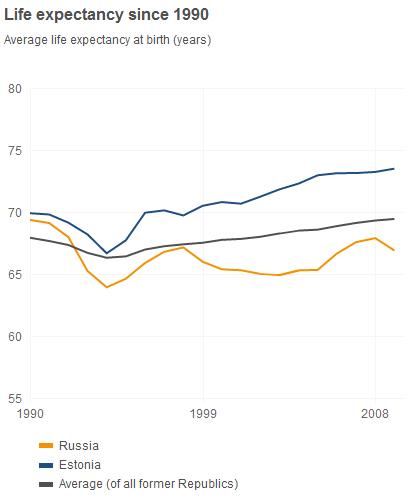 Finally, there is the chart for democracy, and here again Russia’s performance is truly abysmal.

It’s wonderfully ironic that Estonia is so far out ahead of Russia, since Russia has been doing all it can to destroy Estonia, including a brutal and internationally famous wave of cyber attacks. Through it all, Estonia has developed a fully-realized and civilized democracy, spitting in the eye of its giant neighbor and it threats, showing the people of Russia that it can be done. Without oil resources, Estonia has proven to Russia that it can build a vibrant economy that puts Russia’s to shame.