In 1995 the Russian artist Alexander Savko painted a series of images interposing the face of Mickey Mouse onto famous historical scenes, like the one above.

Last week, a Russian court determined that Savko’s image of the Sermon on the Mount with Mickey Mouse (shown after the jump) was “extremist” and illegal and banned it from public display. 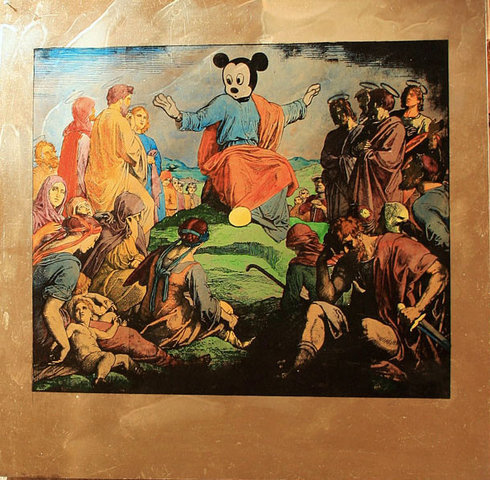 Savko is now a criminal in Russia, as is any gallery owner who displays this work.  We here on LR are also criminals for republishing it.

The action serves to underline the extreme influence now being wielded in Russia by the Orthodox Church, which is seeking the same kind of strict control over Russian society was was held by the Politburo in Soviet times.  Russian dictator Vladimir Putin is well on board with this strategy, and recently declared:  “The Church is always with us, it has a huge influence on the moral atmosphere in society.”

But the Church is really only concerned with its own power, and in that is no different than the Kremlin itself.  The Russian people, meanwhile, are not concerned with their own history — if they even know it. They don’t care to recall how only a short time ago the government of the USSR was imposing policies just like this one, or how that government collapsed into rubble because of the total blindness that resulted from it.

Increasingly, clever Russians realize that they must once again flee their country to avoid this type of draconian crackdown on basic freedom and information.  In Soviet times, it was not long before the government simply banned citizens from leaving the country in order to avoid this “brain drain,” as if it could force people to be patriotic and successful at gunpoint. That strategy proved insane, and the USSR collapsed. If Russia willingly walks down the same path again, how can it expect results that are any different?