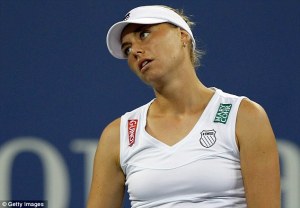 Another one of those days for a hapless Russian #1.

Russia’s best female tennis player, world #3 Vera Zvonareva, made a little trip out to Carlsbad, California the first week of August to play in the WTA Mercury Insurance Open.  She had her little holiday planned out so nicely.

What made the tournament attractive for Zvonareva was that she would be seeded number 1 and the number 2 seed would be Andrea Petkovic  of Germany, ranked #11 in the world. In other words, no other top ten player besides the Russian even entered the tournament, so Zvonareva would have a cake walk to the title and a pile of virtually free rankings points.

But the best-laid plans of mice and Russians gang aft agley!  Despite her sweet little scheme, Zvonareva barely even made it to the finals and did not come close to taking the title.

In her semi-finals match, the devious Russian faced Anna Ivanovic of Serbia, seeded #5 but ranked a mere #18 in the world.  Zvonareva opened the match with a break of serve and then she promptly fell apart.  Ivanovic drew even at 5-5, held serve then broke the Russian to take the first set 7-5.  Zvonareva served a double fault on set point. Ouch.

Ultimately, the weakness of the Serbian prevailed and Zvonareva lucked into the finals with hardly any effort required to overcome the first-set loss.  But once in the finals, she was exposed and humiliated in an easy straight-sets loss to Agnieszka Radwanska of Poland, seeded third but ranked just #14 in the world.  Without even having to face the #2 seed in the tournament, Zvonareva could not take the title or even be competitive!

The Russian pretender served woeful 57% and barely managed to win half the points played on her second serve.  She did not break Radwanska’s serve once, and in fact only had two chances to do so in the entire match even though Radwanska is hardly famous for devastating power.  The Russian was soundly thrashed by a player who had never once taken a set from her in any of their past meetings, much less ever defeated her, and who had not won a tournament of any kind in three years.

2 responses to “Russian Collapse in Carlsbad”