(1)  EDITORIAL:  The Wheels come off the Putin Regime

(2)  EDITORIAL:  The Horror of Russian Barbarism

NOTE:  Over on American Thinker, LR publisher and founder Kim Zigfeld reveals that just after calling the USA a nation of “parasites” Vladimir Putin had his bestie Barack Obama put on a postage stamp. That’s because Obama hates Americans as much as Putin does? Nice.

NOTE:   We’ve said it before and we’ll say it again, there’s simply no idiot like a Russian idiot.

NOTE:  We’ve said it before and we’ll say it again, there’s simply no maniac like a Russian maniac.

EDITORIAL: The Wheels come Off the Putin Regime

The Wheels come Off the Putin Regime

Four stunning recent events showed how the wheels are coming off the dictatorial regime of Vladimir Putin.

First, Putin was humiliated by being denied Germany’s annual Quadriga award after international pressure forced the Germans to publicly withdraw it.

Then, a new public opinion poll revealed that Putin is becoming just as unpopular at home as he is abroad.

Then it got much worse.

END_OF_DOCUMENT_TOKEN_TO_BE_REPLACED 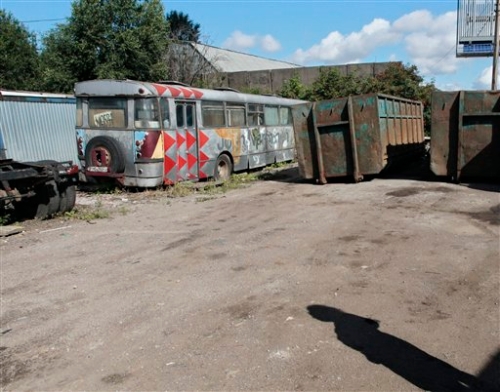 The Ghastly Horror of Russian Barbarism

It’s really amazing how, no matter what horrific and repugnant thing you may have seen from Russia, the country can always surprise you with something even more vile tomorrow.

What would you say if we told you, for instance, that the bus shown above is “home” to dozens – that’s right dozens — of helpless animals?

What if one of them was a super-famous animal celebrity, who had performed at a nationally famous circus, in feature films and even at the Olympic Games?

What if that celebrity, Katya the Bear, now “spends the long hours jumping up and down in her cage and trying to crack the rusty metal railings with her chipped and yellowed teeth”?

END_OF_DOCUMENT_TOKEN_TO_BE_REPLACED

One of the most utterly hilarious lies we have heard about the people of Russia is that their taste in food is much better than that of Americans, that they have no interest in American fast food.

How odd, then, to see major stories in both the New York Times and the Moscow Times reporting on the explosive growth of American fast-food franchises in Russia.  Subway is poised to overtake McDonald’s in Russia, the MT reports, and it’s not because of lo-cal or vegetarian dining options like those popularized by spokesperson Jared Fogel in the USA.  Nope, from Subway Russians demand only sandwiches packed with fatty sausages and other meats.

END_OF_DOCUMENT_TOKEN_TO_BE_REPLACED

Ariel Cohen and Steven Blank, writing on the Heritage Foundation website, warn about the dangers of Russian imperialism and aggression and the craven policies of Barack Obama that are facilitating them:

For many years, Russian diplomats have openly proclaimed that the former Soviet republics that make up the Commonwealth of Independent States (CIS) are not truly sovereign states. Russian analysts have stated that Russia regards the Obama Administration’s “reset” policy as a U.S. admission that the CIS is within Russia’s sphere of influence. The reset policy has hitherto conspicuously failed to address important U.S. interests in Eurasia, including preventing the emergence of a hegemonic power in Eurasia, maintaining a level playing field in access to markets and natural resources, and developing democracy and free markets based on the rule of law. Since the “reset,” President Obama has downgraded his meetings with post-Soviet heads of state, signaling a lesser U.S. involvement and interest. Some senior U.S. officials have even told their subordinates not to bother them with the problems of the Caucasus.

END_OF_DOCUMENT_TOKEN_TO_BE_REPLACED

Duma Deputy: Russia will not Last to 2020

Sergei Petrov, a Russian State Duma deputy from the Just Russia party and founder of Rolf Group, writing in the Moscow Times:

Strategy 2020 — the question of where Russia will be in 2020 — hangs in the air. There are a variety of scenarios being offered by leading economists, political scientists and other analysts, but one thing is clear: There will be no miracles in the next nine years. The prospects for a country mired in archaic institutions, an oil- and gas-dependent economy, systemic corruption, unprotected property rights, corrupt courts, fraudulent elections and an apathetic population can only be dim at best.

I’m almost certain that Russia will not be able to survive in its current borders through 2020. This is not an exaggerated, sensational prognosis taken from the blogs of radical liberals or anarchists, but a clear-headed, objective analysis based on the Kremlin’s flawed policies over the past decade.

END_OF_DOCUMENT_TOKEN_TO_BE_REPLACED

Why do Russians hate Ice?

Alina Simone, a singer, blogging at the New York Times:

A Russian acquaintance of mine who grew up in Bensonhurst, Brooklyn, recently told me that her father microwaved his orange juice. Her grandmother also used to heat her ice cream in a saucepan on the stove. She remembers once asking her grandmother why it was even called “ice” cream, when by all rights it should be called warm cream, or maybe hot cream. “Things have all kinds of crazy names,” her grandmother snapped back. “How should I know?”

If you were born in the Soviet Union and are of a certain age, ice is your enemy. As the daughter of émigrés from Ukraine, I was raised on room-temperature beverages and always associated ice with a raft of great American stuff other kids were allowed to have but I wasn’t: puppies, sheet cake, fun. My own grandmother would cringe from a glass of ice water as if it were a syringe of Ebola virus. To this day I have no idea what disease she associated with the consumption of cold liquids. Pneumonia? Athlete’s foot? Chlamydia?

Why do Russians hate ice? I called my dad and posed the question.