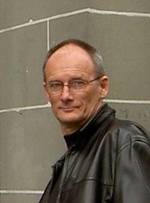 Scary, no? The scariest thing is that he actually thinks he looks good!

It’s not often that we are called upon to defend the people of Russia from the unwarranted attacks of a Russophile, but when the occasion does arise we are very well pleased.

Such is the case with a recent article for the shameless Russophile propaganda project known as “Russia Beyond the Headlines” by the shameless Russophile shill Eugene Ivanov (who scarily poses on his blog in the same type of black leather coat the NKVD wore during an execution of a dissident, and which just recently came back into fashion in Russia).

Ivanov claims the people of Russia are clueless idiots because the vast majority of them think that their court system is corrupt when in fact it routinely rules in their favor.  We strongly disagree.

Ivanov offers an amazing admission to his readers:  “in cases that are not politically motivated or involve big money, citizens have a decent chance of winning.”  That’s right, he openly admits that when the Kremlin is interested in the the outcome of a case, or any of Russia’s oligarchs are involved, the ordinary person has no chance of winning.  It’s an odd thing for someone who is trying to convince the West that it has Russian courts all wrong, but then this is a Russian we are dealing with after all.

And in this Ivanov has the support of so-called “president” Dmitri Medvedev, who has openly admitted: “Don’t we know that judges take bribes? They do. Who is easier to catch red-handed, a policeman or a judge? A policeman, of course, or an investigator, or a prosecutor, or a civil servant, but just try to catch a judge!”

But Ivanov claims his source proves that whenever the powers that be care nothing about the result, Russian courts rule for citizens most of the time.  His source (he doesn’t link to it on RBTH, and when he republishes on his own blog he gives only an article hidden behind a firewall; here’ the actual text) is nothing but an editorial from Vedomosti, from which Ivanov shamelessly plagiarizes the above-quoted statement, making it seem as if he had interviewed many lawyers.

Relying solely upon data from the Russian Supreme Court, to which it does not link, Vedemosti does state that Russian citizens have won a majority of cases filed against police and bureaucrats.  Based on this totally undocumented information, Ivanov then concludes that Russians who express doubts about the court system — Russians like President Medvedev, mind you — are idiots.

Needless to say, there’s no in depth analysis.  Ivanov does not even try to explain how long it takes citizens to achieve their “victories” or at what cost and reward, much less does he attempt any research of any kind beyond reading the Vedomosti editorial.  Naturally, he does not pause for a second to wonder if data produced by infamously corrupt judges is reliable .

Ivanov doesn’t care to give one single example of a really significant money judgment being entered against the police, the kind that would make them sit up and take notice and make fundamental changes – much less the kind that would fully and fairly compensate the victim for her losses — much less of such an incident being prominently reported on state-owned Russian TV.

He doesn’t stop to ask whether the plaintiffs who were victorious in the small number of cases cited by Vedemosti might have been oligarchs, people who used bribery and chicanery to achieve their “win” in court.

Ivanov doesn’t care to examine the hundreds of cases that have been filed in Strasbourg challenging the lawfulness of Russian court decisions.  Just days ago, for instance, jailed oligarch Mikhail Khodorkovsky proved that his legal rights had been horrifically trampled upon during his first criminal trial, and won tens of thousands in damages against the Kremlin.

And most of all, of course, he doesn’t stop for a second to consider the implications of his thesis, that Russia is a nation of apes so dumb they don’t even know what their own court system is really like.  What kind of future would a country like that have, anyway?  For that matter, what kind of future does a country have when it’s present openly admits his judges take bribes and there’s nothing he can do about it?

Medvedev’s reforms are often ridiculed by the country’s liberal intelligentsia, which prefers to accuse the president of “talking the talk, but not walking the walk.” What exactly the president is supposed to do to prove that he is “walking the walk,” is not clear. One frequent suggestion is to fire Prime Minister Vladimir Putin or one or two of the supposedly corrupt members of his cabinet; the legal grounds for such an action, however, are never articulated.

Medvedev doesn’t need legal grounds to fire the Prime Minister or his cabinet. He can fire them any time he wants, for any reason or no reason.  What’s more, it’s perfectly obvious that what’s wanted from Medvedev is the arrest and prosecution of corrupt judges and the implementation of legal reforms that would guarantee their independence from the executive branch.

Then this reptile rants:

For many Medvedev critics, the real situation in Russian courts appears to be completely inconsequential: the only legal issue that matters to them is the guilty verdict in the second Khodorkovsky-Lebedev trial.  Their approach to establishing the rule of law in Russia is quite peculiar: On the one hand, they call on the president to ensure the independents of courts; on the other, they criticize Medvedev for not preventing the guilty verdict by the Khamovnichesky Court. How can Medvedev win?

This is the sort of crazed, demented rambling we can now expect to issue from the defenders of Putin’s Russia as the nation circles the toilet bowl headed for the final flush.  Things are so bad now that they themselves can’t help but admit as much, and then they must launch themselves on increasingly hysterical, seemingly drug-induced fantasies in order to mount some kind of defense.

None of it changes anything. The people of Russia are not wrong when they say that their courts cannot be used to control their government.  Ivanov seems to think Russians should not care about basic morality or policy, but should only care about their own personal interests. Since, according to him, they have a good chance in Russian courts as long as their disputes are irrelevant, they should ignore the wider problem of corruption that brings down folks like Khodorkovsky and Magnitsky and leave Russia ruled by a clan of proud KGB spies.

This kind “thinking” cause the collapse of the USSR, and it will have the same effect on Putin’s Russia.

In a larger sense, however, Ivanov is of course dead right when he argues that Russia is a nation of apes. Because the fact is that even correctly realizing that their court’s have gone berzerk Russians do absolutely nothing to correct the situation. Instead, they allow Putin and his KGB cohort to run roughshod over the courts, jailing their political enemies and crushing dissent in every form.  They watch like sheep as Putin revives the polices of the USSR, one of the most dismal failures in world political history.

So, nice work there little Mr. leather-sheathed Russophile reptile! You’ve reminded the world how hopeless Russians really are, though you’ve gone all about the houses to do it.  Keep it up, and one day you might get smart enough to become a Russophobe.