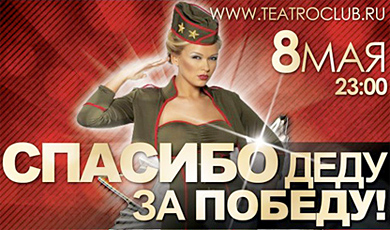 Advertisement for a World War II party in Moscow. The message reads: Thank you Granddad for the victory we had!

You could be forgiven if you were somewhat perplexed reading the news out of the Caucasus on May 8th. Each different media outlet you turned to seemed to have a different figure for the number of “militants” and “rebels” Russia had killed in its latest confrontation, though in each case they insisted only one member of the Russian armed forces had perished in the exchange.

The Kremlin apparently felt that offing a few “militants” on the eve of Russia’s “Victory Day” celebrations the following day, festivities upon which Russia was lavishing $43 million, was the best way of honoring Russia’s “big win” in World War II (that and snubbing the Mothers of Beslan and, of course, foiling a terror attack).  Meanwhile, Russia’s veterans continue to live in conditions of dire poverty, its draftees continue to be wantonly slaughtered in the dedovshchina meat grinder, and the Russian army continues to collapse.  Little is known about this fact in the wider Russia because Russian TV doesn’t report it, opposition politicians (who dont’ exist) don’t complain about it in the Duma, and Russian classrooms are full of only pro-Kremlin propaganda.

All of which is beside the point, because even if Russia could afford $43 million to celebrate a military victory, it didn’t win one in World War II. Russians think so only because, as with slaughtered militants, Russia simply doesn’t know the facts. It was taught about World War II by the Soviet government, the most pathologically deceptive and dishonest regime in human history, and it is now governed by a proud KGB spy who is nothing more than a product and a relic of that era.

What actually happened in World War II is really quite simple:  Imagine a boxing match in which one fighter, after being brutally pummeled, knocks out the other with a lucky punch.  A few days later, the “winner” is dead due to complications of the injuries he sustained in the fight, while the “loser” is fit as a fiddle, goes on fighting and becomes a millionaire world champion. What sort of idiot would claim the dead man won, and hold celebrations for his “victory”?

A Russian idiot, that’s who.

Today, Germany bestrides Europe like a colossus, with an economy and standard of living many times higher than Russia’s even though it has a population only half as large.  It is a leader in Europe, while Russia is a follower (if that).  And the USSR, which “won” World War II against Germany? It doesn’t even exist any longer. It collapsed and disappeared in no small part because of the devastating injuries it sustained in World War II when whole swaths of European Russia were obliterated.  Meanwhile Germany, which had been separated, is reunifed and stronger than ever.

Two issues ago, we pointed out the disgraceful behavior of Russia during the Chernobyl outrage in the 1980s. Some of the stupidest Russophile commenters claimed Russia could not be blamed for that because it involved Ukraine and the Soviet government. But if that is true, then why are Russians celebrating a “victory” in World War II that they had nothing to do with?

Russians lost World War II.  They live in poverty now because they lost it.  Germany ranks #20 for life expectancy among world nations, with Germans living to age 80 on average.  Russia ranks #135, and most Russians don’t live to see 66. Russians live on average nearly fifteen years less than Germans.  Hitler could not have planned it better.

The country Russians lived in during World War II has collapsed in infamy.  Germany ranks #19 in per capital nominal GDP, with over $40,000  per German. Russia ranks a pathetic #56, with barely more than $10,000 per Russian. Germans have four times more money per person than Russians. That’s victory? If so, we here at LR will take defeat each and every time.

These are facts nobody can dispute. Russia is much worse off in the aftermath of World War II, Germany much better off.  Germany is booming, Russia is busting and its population is literally going extinct.  The damage inflicted on Russia during World War II was simply too great for any nation to sustain.

And let’s not forget that in the early days of World War II Russians made common cause with the Nazis in a disgusting effort to carve up Europe for the Russian empire. Only when betrayed by the Nazis did Russia fight them; it actually wanted to help the Germans destroy the Western democracies.

Let’s also not forget that while winning its “victory” Russians committed untold atrocities throughout Europe which rival those of the Nazi hoards, including first and formost the unspeakable massacre at Katyn, which the Russians tried to blame on the Germans.

For all these reasons, Russian celebration of World War II is nothing but an foolish atrocity, yet another reason to view Russia as a nation not yet ready to join the community of civilized nations.