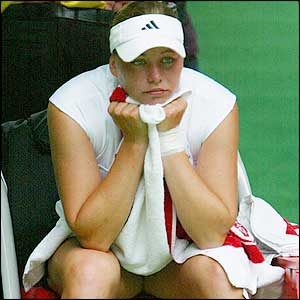 Yeah, kinda sucks to be Russian. We feel you, Vera.

Those clever Russians had a little brainstorm for the major WTA Tour event in Miami, Florida, USA:  What if, they thought, we put our #1 and #3 female players on the same doubles team. Has to be a good result, right?

When #1 Vera Zvonareva (world #3) and #3 Svetlana Kuznetsova (world #15) stepped on the court for their second match of the Sony Ericsson tournament, they were blown off the court with the greatest of ease by a Spanish team composed of players ranked a lowly #33 and #77.

Then came the singles, where things got even uglier.

Once again, as we reported happened at the last significant WTA event, the last Russian standing in Miami was no Russian at all.  Maria Sharapova made it all the way to the finals, and she’s about as “Russian” as apple pie. She has lived most of her life in America and learned her game there, from American teachers.   Her coach, Michael Joyce, is also an American, and her boyfriend isn’t Russian either.

But when you’re a hapless Russian, American help can get you only just so far.

In the finals, Sharapova did not hold her serve once in the first set, tossing in four double faults and nearly two dozen unforced errors against world #8 Victoria Azarenka. She was brutally crushed 1-6.  She then double-faulted on break point in her first service game of the next set, and though up 40-0 in her following service game, she somehow found a way to be broken for the sixth consecutive time in the match there as well. Shockingly, not until the twelfth game of the match did Sharapova finally manage to hold serve for the first time. On her next service game she double-faulted on break point again, thus allowing her opponent to serve for the match at 5-3 in the second set. By that time she had recorded a truly shocking, humiliating total of more than forty unforced errors.  Azarenka then choked while serving for the match to hand Sharapova a break and 4-5, the only possible hope for Sharapova to climb back in the match. Despite this amazing good fortune, Sharapova then lost her own serve, the set and the match immediately thereafter, and fled the court like a bolt of ashamed lightening.

Shamapova fell apart like a cheap Russian suit, in other words, generating yet another brutally unwatchable match (on American broadcast network TV no less) that only served to further alienate fans who were forced to listen to her grating, intolerable, chalk-on-a-blackboard squeals and screams throughout the match.

But Sharapova the American was a superstar compared to the lowly, ragtag clan of “real” Russians who vied for the singles crown.

Russia started the tournament with Zvonareva, Kuznetsova and Sharapova in the top 16 seeds  and Anastasia Pavlyuchenkova, Nadia Petrova, Alisa Kleybanova and Maria Kirilenko in the bottom 16 — more than one-fifth of the total seeds in the tournament.  But other than Sharapova, only Zvonareva made it as far as the quarter finals, and there she was blown off the court in easy straight sets by a much lower-seeded and ranked Polish opponent. As is their wont, the other Russian players fell like dominoes to second-rate foreign opponents who exposed the Russians at every opportunity as being the pretenders they are.  They melted under the hot sun of Miami just as they had done under the scorching desert sun a week earlier in Indian Wells, California.

And thus ended Russia’s debacle in the two major American hard court events, Miami and Indian Wells.  They showed they are simply not capable of competing, much less of surprising anyone with greatness, and showed that their presence in the game is a millstone around its neck, seriously impairing its ability to generate fan interest, revenue, and compelling tennis.

13 responses to “Russians, Melting in the Hot Miami Sunshine”