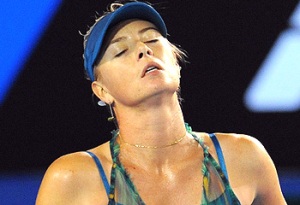 That was Russian tennis player Maria Sharapova talking, shortly after losing her Fed Cup match in Moscow in easy, non-competitive straight sets  3-6, 4-6 to France’s Virginie Razzano, the lowly world number 83.  Sharapova may well have found it hard to get inspired by patriotism paying in and a for a country in which she spends hardly any time. She lives in the USA, owns lots of property there, and is engaged to a non-Russian who does likewise.

And what did Shamapova do after making this bold statement? She promptly quit.  She was replaced in the second-round singles match by countrywoman Anastasia Pavlyuchenkova in the desperate hope of eking out a win against the unheralded and hopelessly out-gunned French squad.  What’s more, the fourth member of Russia’s Fed Cup team, Dinara Safina, did not even set foot on the court. Sharapova then promptly also quit her next scheduled tournament, claiming she had a cold. Russians fighting on? As if.

Sharapova was, of course, simply lying (in classic Russian fashion) when she said Russia is “not known for giving up.”  In fact, that’s exactly what Russia is known for, in every walk of life, all throughout history.  When the going gets tough the Russians get going, right out the “Exit” door.  When democracy is too tough, they opt for dictatorship. When a tennis match is too tough, they quit.  As such, Shamapova proves herself 100% Russian to the core with her behavior in Moscow.

Not one of the four members of the French Fed Cup team that Russia faced off against on its home court in Moscow was ranked in the top 50 in the world.  Only one of Russia’s team members was ranked outside the top 25 and that player, Safina, is a former world #1. Yet, Russia lost its first two matches against the French side, and then it panicked.  It replaced Sharapova with Pavlyuchenkova in Sharapova’s scheduled match against France’s top player, desperately hoping to avoid a lop-sided ejection from the tournament in the first round.

We thought we had seen it all from our gal Maria.  Our blog is full of documentation of her pathetic failure as well as that of her countrywomen on the tennis court.

The craven behavior of Safina and Sharapova left Russia’s two remaining players, Svetlana Kuznetsova and Pavlyuchenkova, to carry the load of all three of Russia’s Day 2 matches. They needed to win all three for Russia to advance, and their rankings indicated they should have had an easy time dispatching their lowly French opponents.  Both players won their singles matches with relative ease, and then had to go right back out on the court to face the French doubles squad in the deciding rubber; one of the two French players was required to do the same, and both were extreme underdogs against their far higher-ranked Russian opponents:  The Russians were ranked #14 and #23 in the world, the French #67 and #262.  Still, the Frenchies managed to draw the Russians into a first-set tiebreaker before finally collapsing and handing the Russians the victory.   Had Sharapova (or Safina for that matter, who disgraced herself in epic fashion at the year’s first grand slam) remained involved, the Russia side would no doubt have gone down in flames.

Once again, Shamapova proved herself a perfect metaphor for modern Russia.  All illusion and no substance, all luck and no real effort, Sharapova and Russia both exist on misperceptions and misrepresentations.  When put to a real test, both Sharapova and Russia inevitably disappoint and collapse. Russia, after all, gave the world the term “Potemkin Village,” an official state policy of lies and deception in lieu of actual analysis and reform, and its reliance upon such a mockery of government has caused the state to collapse over and over, and Russia to degenerate closer and closer to third world status.

11 responses to “EDITORIAL: Maria Sharapova, Russian to the Rotten Core”