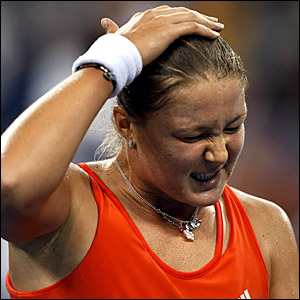 The year’s first grand slam proved yet another new low in the pain and humiliation being inflicted upon Russia of late by the women’s professional tennis game.  Calling these women “dominant” is like calling Americans dominant in soccer.

Things started out at the Australian Open with an amazing bang of negativity when Dinara Safina, one of only two Russian women in tennis history to be ranked #1 in the world, was blown off the court like the fraudulent pretender she is in her very first match of the tournament by Kim Clisters.  Safina became the very first player of either gender to be ranked number one and then ejected from a grand slam event without winning a single game, getting savagely crushed by Clijsters 0-6,0-6.  In was one of the most disgraceful performances in tennis history.  Safina’s doubles team was also booted out in its opening match in woeful fashion.

And then it got worse.

Russia’s most famous player, ever, and winner of its largest group of grand slam titles, #14-ranked Maria Sharapova, was booted out of the tournament before the quarterfinals in easy straight sets by the lowly #30-ranked German Andrea Petkovic.

Svetlana Kuznetsova, winner of two grand slam titles (though only because she faced lame fellow Russians in the finals of those tournaments) was also whipped before reaching the quarterfinals, though at least by a higher-seeded player —  Kuznetsova is in freefall in the rankings, and squeaked into the seedings at #23.

Russia’s #13 seed Nadia Petrova meekly lost to an unseeded opponent in the third round.

Russia’s #18 seed, Maria Kirilenko, did not even make it to the third round, getting blown off the court in the second, again by an unseeded rival.

All this carnage left only one Russian, the country’s top seed and #2 overall, with a chance of getting as far as the quarterfinals in the year’s first grand slam.  And fate was smiling on Vera Zvonareva:  Her fourth-round match was one of only two in the field of eight that did not involve a seeded player. She was only required to beat lowly Iveta Benesova of Czech Republic, ranked just #60 in the world, after barely squeaking past the #31 seed in the third round in  tight second-set tiebreaker.  Should she beat Benesova, Zvonareva could not face a top-20 seed in her quarterfinals match; she was guaranteed to face the weakest opponent of any contender in the draw.  Her road into the semifinals, in other words, was a cakewalk.

Once in the semis, however, Zvonareva then needed to face Kim Clijsters, the #3 seed. This was a match Zvonareva was also supposed to win, since being the #2 seed meant she should have appeared in the finals against world #1 Caroline Wozniaki.  And having had such a ridiculously easy path into the semi-finals, Zvonareva was well rested and in the best possible position to thump the lower-ranked and seeded Clijsters and march into a grand-slam final. What’s more, Clijsters is a journeywoman player who has already retired once from the sport and given birth to a child.

But Zvonareva was not even competitive. She went down in easy straight sets to the lower-ranked Clijsters 3-6, 3-6.  It was a non-competitive match in which the Russian was once again exposed as a mere pretender, her #2 ranking an utter sham.  As soon as Russia’s “best” player was forced to be on court with a significant opponent, she did not merely lose but spectacularly collapsed, just as she has done in every grand slam final she has ever entered. If she’s the best Russia can offer, it’s a pretty sad commentary on the state of Russian tennis.

And that was the end of Russia.