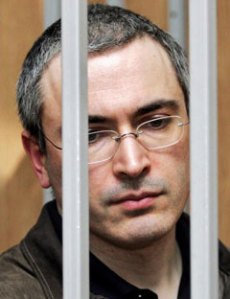 A truly brilliant and inspiring editorial from the Christian Science Monitor, which takes the words right out of our mouth. There is something deeply wrong, perhaps evil, about the President of the United States and his malignant advisor Michael McFaul, who continue to betray American values in the hopes of scoring cheap electoral points with sham foreign policy “victories” while Russia descends into neo-Soviet darkness:

Talk about timing. A Russian court waited until this week – after the US Senate had ratified an arms-control treaty with Moscow – before handing down yet another conviction on that country’s best-known political prisoner, Mikhail Khodorkovsky. Sentencing is expected in coming days.

The conviction also came as the West is preoccupied with the winter holidays and not focused on the rise of human rights abuses in Russia.

But here’s the best timing: Mr. Khodorkovsky will now likely be sentenced to several more years in a Siberian penal colony – further isolating him until well after next year’s parliamentary elections and a 2012 vote for president.