Slaughter, humiliation and woe for Russia in the Big Apple 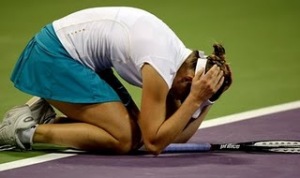 Fully one-fourth of the 32 women in the draw at the final grand slam tennis tournament of 2010, the U.S. Open in New York City, were Russians.  But if based on that you expected big things from the Land of Putin on the court, you were sadly mistaken.

It was nothing but slaughter, humiliation and woe once again for the Russians, who are ruining the very sport that gives them their living, making it an unwatchable charade.

Nadia Petrova got things started.  The #17 seed and Russia’s fifth-highest, was blown off the court in her very first match by an unseeded, unknown opponent.

Then Russia’s lowest seed, #28 Alisa Kleybanova, was ejected by an unseeded opponent in the second round.

Second from the bottom was #23 Maria Kirilenko, who kept the Russian ball of failure rolling as she was ejected in the third round.  Remember, all of these are matches that the seeded Russians are supposed to win easily. But nearly half of Russia’s seeded players were gone before the fourth round had even started.

And then host of top Russians were then butchered in the fourth round.   This included the #20 seed, Anastasia Pavlyuchenkova and Elena Dementieva, Russia’s third-highest seed at #12, though both lost to higher-seeded opponents who were expected to thrash them.

The same cannot be said of #11 Svetlana Kuznetsova, Russia’s second-highest seed. She was crushed in straight sets by an unseeded opponent who had no right to even be on the same court with Kuznetsova, a former US Open champion (though the only way she was able to achieve that feat was by being lucky enough to meet Dementieva in the finals).

This left only Russia’s top seed, #7 Vera Zvonareva, and its most famous player, #14 Maria Sharapova, with any hope of reaching as far as the quarter finals.

Sharapova, the least Russian of the group, a woman who moved to the United States as a child, learned her game there, and owns real estate in the USA, where she lives permanently, had to face the tournament’s top seed, Caroline Wozniaki (world #1 American Serena Williams was injured and did not play).  Sharapova’s about as “Russian” as the rule of law.  However, her performance is fully Russian.  In the first set against Wozniaki her serve was broken twice and she offered up a shocking 19 unforced errors (three times as many as her opponent) while losing 4-6; throughout the match her “strategy” was to bash the ball as hard as humanly possible on each shot, grunting like an insane gorilla all the while.  The top seed, who opted for actually playing the elegant sport of tennis, dismantled Shamapova as if toying with a boorish child that stumbled onto the court by accident.  In the seventh game of the second set, tied at three all, Shamapova double faulted on break point and handed the advantage to Wozniaki (who, by the way, looked far more alluring on the court than did the grunting Russian giant). And that was it for our gal Maria.

So by Monday night as far as the Russian women were concerned it all came down to the country’s top seed, #7 Vera Zvonareva, the sole remaining woman in the draw with a chance to reach the quarterfinals, and she  came lucky. In her fourth round match she draw an unseeded Andrea Petkovic of Germany, world ranking #38, rather than the tournament’s #4 seed Jelena Jancovic she should have had to face.  Jancovic who lost a freak third-round match to the #31 seed because of extreme wind conditions. Petkovic had also eliminated Petrova, who Zvonareva should have had to face if not Jancovic, and was only in the fourth round because her higher-ranked third-round opponent defaulted. With luck like this, it’s little wonder that Zvonareva managed to climb to the top of the Russian heap.  In nine years of trying, Zvonareva has gotten as far as the semi-finals of a grand slam tournament only twice.

Petrovic handed the match to Zvonareva without the slightest struggle, allowing her to become the sole Russian representative in the quarterfinals. Thus, play confirmed what the seedings and rankings suggested, namely that Zvonareva — a player who has never won a single grand-slam title in her entire ten-year career — actually is Russia’s very best player.  That says all you need to know about the current state of Russian women’s tennis.

Zvonareva also won her quarter-finals match in the same fashion; she faced a virtually known Estonian, barely seeded at #31, and beat her in straight sets as the Estonian tossed in a horrifying nine double faults and sixty — yes, sixty — unforced errors.  A chicken with a tennis racket could have beaten the Estonian that day.  Zvonareva struck a pathetic 10 winners in the entire match while hitting three times more unforced errors, yet still prevailed.

And then the Russian faced the tournament’s #1 seed Caroline Wozniaki in the semi-finals.  Again the Russian’s play was wretched, as she struck 50% more unforced errors than winners.  Again, her opponent self-destructed and collapsed, vaulting Zvonareva into the finals.

But in the finals, the Russian came apart like a cheap suit as soon as her opponent this time, Kim Clijsters, proved reluctant to simply hand her the match.  In a spectacle that TV commentator and tennis great John McEnroe called “painful to watch” on national TV, Zvonareva struck a horrifying four times more unforced errors than winners, double-faulted on break point not once but twice, and managed to win only three of fifteen games played in a match that barely lasted one hour.

It was easily one of the worst grand-slam finals ever played.

You may say that the poor Russian was overwhelmed by the occasion, but it wasn’t her first grand slam final.  She appeared in the final at Wimbledon this year against a different opponent but with exactly the same result, total collapse and failure, not even a remotely competitive effort.

A little more play of this kind from the Russians and the women’s tennis game will surely go the way of the dodo.

12 responses to “Slaughter, humiliation and woe for Russia in the Big Apple”