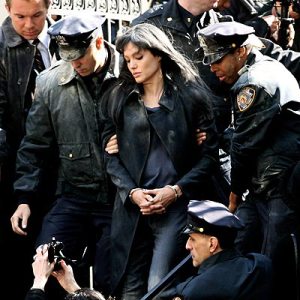 The horrifying new Angelina Jolie movie, “Salt,” has our vote for the worst. and most well-deserved, publicity Russia has ever received in its sordid history.

In an amazing bit of timing, “Salt” was released almost at the same moment as the spy scandal involving Anna Chapman, dramatizing for all the world to see the dangers of Russian sleeper cell of spies being turned loose to wreck havoc on the American government, and the world. Had this not been the case, Russophiles would surely have tried to claim that sleep cells like these did not exist.  Now, they are left to mumble and stand utterly exposed.

The image of Russians depicted in the film is truly shocking, bloodthirsty and barbaric.

Russians are shown invading the White House, slaughtering innocent people left and right, and seeking to use an nuclear attack on the Middle East, launched by Russians, as a basis to blame and destabilize the United States. Their actions are so barbarically brutal in cruelly murdering the innocent young man who is Jolie’s love interest, that Jolie’s character is turned against her Russian sponsors and sets out on a mission to destroy them.

The world of Russia shown in this film (and in others, like “The Bourne Supremacy”) is, in other words, the same world we have been depicting here on this blog for years now.  It is as world of horrific violence and self-destruction, of pathological ideological hatred, of crime and corruption beyond all human imagining.

In fact, remembering names like Politkovskaya and Estemirova and Starvoitova and Litvinenko, one might even say that the image of Russia contained in “Salt” is not harsh enough to be fully accurate.  But, at least, one can say that Russia is no longer able to pull the wool over the eyes of a clueless Western world, even though some helpless idiots like Barack Obama remain in the dark.

A world this bleak must surely collapse, just as the USSR did not so long ago.