(4)  VIDEO:  Fighting Back against Putin’s Gestapo

NOTE:  We’ve got loads of video in today’s issue.  (1) and (4) both focus on YouTubes, and have you seen Direct TV’s new commercial lampooning the “New Russians”? If not have a peek.

NOTE:  Speaking of “A Dog’s Life” in Russia, here’s Russia at its worst, dismembering dogs for fun, also courtesy of English Russia.  Shocking, use care when viewing.

EDITORIAL: In Russia, a Dog’s Life

In Russia, a Dog’s Life

According to the Russian government, a citizen of Russia needs an income of at least $6.43 per day to survive.  For this reason, the Kremlin has established a minimum wage of $190 per month, which works out to $1.18 per hour for four weeks of full-time work.

The minimum wage in the United States, by contrast, is $7.25 per hour —  a figure many argue is criminally low.

You read that right — the minimum legal wage for an American is more than six times higher than that of a Russian.  Many individual American states have their own minimum wages requirements which are even higher.  The State of Washington offers the highest — $8.55 per hour.

And America is a capitalist country — the minimum wage in socialist countries like France is far higher, hovering around $12 per hour.  France’s GDP is only slightly more than double that of Russia, yet its minimum wage is more than ten times higher. That single fact tells you all you really need to know about how much the KGB regime of Vladimir Putin cares about its people.

But there’s a lot more horror to consider.

END_OF_DOCUMENT_TOKEN_TO_BE_REPLACED

EDITORIAL: Putin on the Edge

Putin on the Edge

An extraordinary YouTube video was making the rounds in Russia circles last week.  It showed Vladimir Putin in his shirtsleeves being confronted outside a government building in Nizhny Novgorod by a throng of enraged local residents who had watched their lives go up in flames.

Putin is attacked for having done nothing to prepare the local population for the disaster of spreading wildfires, and for having failed to make a timely response to the disaster after it occurred.  In brutal, condescending language, talking to Putin as if he were a child, the residents demand action, and Putin stammers ridiculous promises about rebuilding homes from the ground up.

Needless to say, the confrontation was not aired on any national broadcast television, because all those stations are owned and operated by Putin himself.

END_OF_DOCUMENT_TOKEN_TO_BE_REPLACED 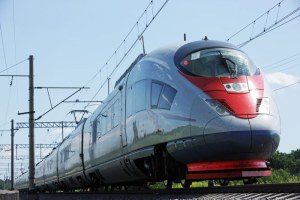 Grani.ru is currently carrying a short article about the start of a new high-speed train service between St. Petersburg and Nizhny Novgorod. This made me curious as I didn’t think Russia had any fast trains. (Not that it is that fast: it covers the 1100 kilometres in 8 hours 25 minutes, which is 129 kph or 80 mph. European high speed trains do 300 kph.)

Grani goes on to say that the train, called the Sapsan, is a joint venture between Russian Railways and Siemens under which Russia is buying 8 trains for 276 million Euro. As this sounded more like a purchase contract than a joint venture, my curiosity was sparked and I followed up on Russian Wikipedia.

END_OF_DOCUMENT_TOKEN_TO_BE_REPLACED

VIDEO: Fighting Back against Putin’s Gestapo

A truly amazing nine-minute video has surfaced on YouTube recording the brutal crackdown against and heroic defiance of the “31” protesters in St. Petersburg a few days ago.

The group assembled to demand their rights to peaceably assemble under Article 31 of the Russian Constitution, and were summarily arrested by an army of OMON gestapo troops.  Despite repeated acts of crude violence against the protesters, they never strike back. But after being stuffed into a bus for transport to jail, they climb out onto the roof and continue their protest, absolutely mocking the authority of the police.  As the photos after the jump clearly show, the onlookers were utterly horrified by the barbaric conduct of the so-called “law enforcement officers,” who were in fact the only ones breaking the law this day.

END_OF_DOCUMENT_TOKEN_TO_BE_REPLACED

Reporting from Moscow — From the smoke of the wildfires engulfing the Moscow region and the embarrassment of this summer’s spy scandal, Vladimir Putin is reemerging as Russia’s most powerful man and, experts say, a candidate to reclaim the presidency a little more than a year and a half from now.

For more than two years since term limits forced him to give up office and take the prime minister’s job instead, Putin and his protege, President Dmitry Medvedev, have seemed to be in lockstep. One could see a television report on Medvedev meeting with business owners followed by one on Putin talking to children in a sports stadium. Or read about Medvedev signing a nuclear arms treaty with the U.S., and Putin promising grants for university research.

But many analysts long have predicted that one of the two eventually would elbow the other aside. And in the last month, the situation has changed.

END_OF_DOCUMENT_TOKEN_TO_BE_REPLACED

If we were to tell you that so-called “Russian” tennis player Maria Sharapova won a match against a top-ten opponent despite having her own serve broken six times while serving a shocking fifteen — yes, fifteen, nearly four full games’ worth of — double faults, we bet we know how you’d respond.

“She must have been playing a Russian,” you’d quip.

And you’d be right.