NOTE:  LR founder and publisher Kim Zigfeld’s latest installment on the mighty Pajamas Media megablog exposes the outrageous misconduct of American PR firm Ketchum as it helps Vladimir Putin to undermine truth, justice and the American way in Russia.  If you have any dealings with this odious, noxious little firm and have any conscience at all, you will immediately divest.

NOTE:  In any civilized country, a famous abused orphan gets loads of offers from new families.  Care to guess what happens in Russia?

Russia’s ability to surpass itself, week after appalling week, with ever lower levels of vile, nauseating, subhuman conduct is truly breathtaking.

The Kremlin’s youthful thugs did not hesitate to include octogenarian Lyudmila Alexeeva among those so assaulted.

You read that right:  They put an eighty year old woman’s head on a pike and stuck a Nazi hat on her head. She’s a human rights activist. She’s utterly defenseless and frail. And she’s a Nazi.

END_OF_DOCUMENT_TOKEN_TO_BE_REPLACED

In this year’s budgetary address, so-called “president” of Russia Dmitri Medvedev promised the nation that Russia’s soaring deficit, which will be over 3.5% of GDP next year, would be halved by 2013.

Not only is that not going to happen, we learned last week, but Vedomosti reported (Russian-language link), Russia’s 2013 budget gap will be twice what the Kremlin had predicted and only marginally lower than what Russia will face next year even though the Kremlin’s income is projected to increase substantially through rising oil prices and sales of state assets.  If that income doesn’t materialize as projected, the deficits will soar even higher, to record new levels in 2013 and beyond.

In more devastating news for Russia last week, ConocoPhilips pulled out of its partnership with Lukoil, one of the highest-profile Western investments in Russian history.  CP finally threw up its hands after years of being bullied and defrauded by its Russian “partner” and the Kremlin, making it absolutely clear to the world what happens to any foreign investor foolish enough to put faith in the Russian economy.

What more proof could any thinking person require of the absolute, disastrous failure of the Putin economy?

END_OF_DOCUMENT_TOKEN_TO_BE_REPLACED 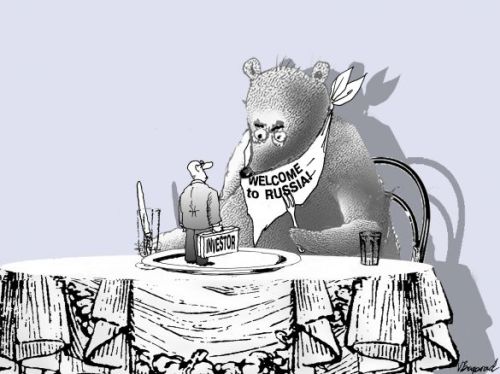 The government approved on Thursday the sell-off of an estimated $29 billion in state assets over three years in what promises to be the country’s biggest privatization since the controversial loans-for-shares auctions in the mid-1990s. But investors beware. Russia’s legal system, including its protection of property, remains weak, as illustrated by a case unfolding at our company, Prosperity Capital Management. It involves the nonpayment of hundreds of millions of dollars by an entity controlled by a member of the Federation Council.

END_OF_DOCUMENT_TOKEN_TO_BE_REPLACED

The New York Times reports (the paper is collecting video submissions from Russian opposition figures and posting them online) :

One day last fall, a police officer here put on his uniform and sat on a drab tan couch before a video camera. In a halting monotone, he recorded two video appealsto Vladimir V. Putin, 13 minutes in all.

He was a nobody cop from a nowhere city, but his words would startle this country.

“How can a police officer accept bribes?” the officer asked. “Do you understand where our society is heading? You talk about reducing corruption,” he said. “You say that it should not be just a crime, that it should be immoral. But it is not like that. I told my boss that the police are corrupt. And he told me that it cannot be done away with. “I am not afraid of quitting. I will tell you my name. I am Dymovsky, Aleksei Aleksandrovich.”

The videos were uploaded to YouTube in November, and a nation that has grown increasingly infuriated by police wrongdoing could not take its eyes off them. Here, finally, was an insider acknowledging the enveloping culture of corruption in Russia’s police forces — the payoffs large and small, the illegal arrests to extort money, the police chiefs who buy fancy cars and mansions on modest state salaries.

END_OF_DOCUMENT_TOKEN_TO_BE_REPLACED

During his visit to Ukraine on Saturday, Prime Minister Vladimir Putin told journalists that he met with the 10 Russian “illegals” — who pleaded guilty in a U.S. court to being agents for the Russian government — at some point after they arrived in Moscow on July 9.

“I can tell you that it was a hard fate for each of them,” Putin said. “First, they had to master a foreign language as their own.”