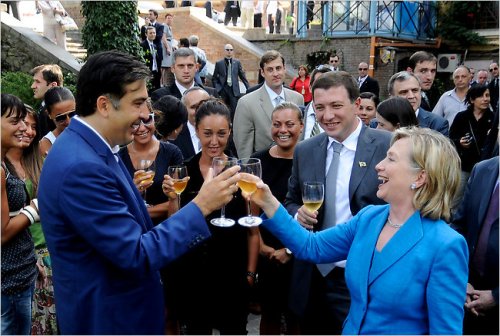 They denied it, of course.  Just the same way that, a few days earlier, they had denied the spies arrested in the United States were Russian.  Soon, however, they were forced to admit their denials were pathetic lies, and that the spies were in fact Russian citizens. Soon, they were bartering for the release of those spies they said did not exist.

We can imagine the thoughts racing through the rodent-like “minds” of the KGB spies who rule the Kremlin, the same spies whose pathetic plans were exposed in the United States, when viewing the photograph at the head of this column.

They were apoplectic, we know, when they then heard Clinton declare that Russia was guilty of an “invasion and ongoing occupation” of Georgian territory in Ossetia and Abkhazia, and to hear her condemn their government as making the U.S. “wary of the steel vise in which many governments are slowly crushing civil society and the human spirit.”  That’s brutal, unflinching language delivered from America’s highest-ranking diplomat regardless of where it was said.  Issued from Georgian soil, of all places, it can be seen as nothing short of a direct provocation.

However Russians scurried and mumbled and tried to cover their shock and pain, the world understood the meaning of the words Clinton uttered and no amount of neo-Soviet propaganda can change that obvious reality. And soon, the Russians were showing they understood it too, issuing bizarre neo-Soviet denials, just as they had originally denied that the spies were Russian.

What Clinton’s remarks reveal, however, rather than any steely resolve on the part of the Obama administration, is just the opposite.  His poll numbers in freefall and the economy on the precipice of a double-dip recession, Obama knows that he cannot afford to inflame the right wing of his party or the Republicans, so he must back away from his outrageous appeasement of the Kremlin.  It shows not strength on the part of Obama, in other words, but profound weakness.  Weakness that will be Russia’s undoing.

But the greatest weakness is clearly Russia’s.  The pathetic “work” being undertaken by the spy clan, fully neo-Soviet in character, proved Russia has not grown or developed in the last two decades, but still languishes under a proud KGB ruler in a dark Soviet backwater.  And watching the U.S. Secretary of State drink a toast with the man Putin said he would hang by his private parts in a public square, the caveman-like denizens of the Kremlin can only pull out their hair and scream as they watch their utter failure displayed before the world.

28 responses to “EDITORIAL: Clinton and Saakashvili”