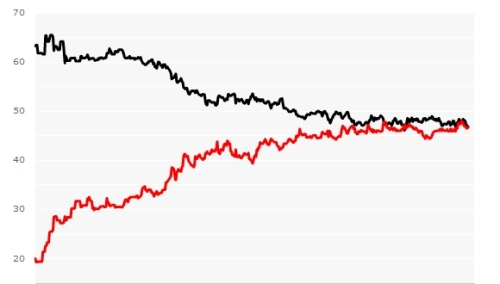 The Obama administration in freefall

The irony of a massive Russian spy ring being arrested in the United States just days after U.S. President Barack Obama finished munching cheeseburgers and touting his “reset” relations with his puppet Russian counterpart  Dima Medvedev could not possibly have been lost on anyone.

The chart above shows the job approval rating of Obama since he took office, courtesy of Real Clear Politics.  While Obama’s disapproval rating (in red) has soared his approval (in black) has plummeted so that now the two figures are for all intents and purposes identical, and well less than 50% of the population approves of Obama’s policies.  He has been denounced even by the likes of ultra left-wing columnist Frank Rich as dangerously close to collapse.

All this time, Obama has gotten closer and closer to Russia, culminating last week in his absurd “burger summit” with Russian “president” Dima Medvedev.

President Dmitry Medvedev this week stepped up his campaign to convince the west that Russia is changing and can now be counted on as a reliable political and business partner. But even as he toured California and talked of creating a Russian equivalent of Silicon Valley backed by foreign investment, the senior partner in Kremlin Inc, prime minister Vladimir Putin, was up to his old tricks.

While continuing to deny Russia uses its energy exports as a geopolitical weapon, Putin, a former two-term president, warned neighbouring Belarus that it could face a total shutdown in gas supplies unless it knuckled under. “Strictly speaking, Gazprom [the state-controlled gas monopoly] has the contract right to cut supplies by 85% or more,” Putin said ominously.

The notion, conveyed by the “burger summit,” that Medvedev rules Russia is pure farce, and the fact that Obama would choose to crudely much cheeseburgers while spewing this nonsense only served to underline how utterly clueless and out of touch this president is where Russia is concerned.

Back in 2006, with a straight face, Vladimir Putin unequivocally promised George Bush that he would implement measures to protect copyrighted U.S. intellectual property from being shamelessly stolen in Russia, one of the worst pirate states on the planet. Since then, Russia has done exactly nothing to honor Putin’s promise.  Yet, Obama blithely ignores this reality and openly proclaims his intention to allow Russia into the WTO, even as every aspect of the Russian economy and state repudiate the core values that the WTO was created to propound and uphold.

If Obama were meeting with Medvedev as part of a plan to divide the Kremlin and conquer it, we would laud Obama as a great American hero.  But to accomplish that, Obama would have to be aggressively pursuing a Reaganite policy of confronting the malignant evil that is Vladimir Putin, and he is doing exactly the opposite.  Like Neville Chamberlain, Obama is simply offering Putin unilateral concession after concession, and allowing Putin’s ridiculous puppet named Medvedev to distract the West’s attention while Putin aggressively continues to create a neo-Soviet nightmare, ruled by the KGB.

Even the likes of Mikhail Gorbachev knows the truth, and fears for the future of his country under Putin.  He minced no words:  “Modernisation can be carried out but only if the people, the entire population, are included in the whole process.  We need democracy, we need improvement of the electoral system and so on. Without that, it will not succeed.”

But Obama is not listening, not any more than Chamberlain ever did.  Thankfully, the people of the U.S. are more wise.  They see the failure that is Obama’s foreign policy, and they are appalled.  If the trend continues, Obama will be at least as unpopular as George Bush was by the end of his first term.

This entry was posted in editorial, obama, russia and tagged russia. Bookmark the permalink.

38 responses to “EDITORIAL: Obama in Freefall”