(1)  EDITORIAL: Russia and the Ape who Governs Her

EDITORIAL: Russia and the Ape who Governs Her

Russia and the Ape who Governs Her

Try to imagine a press conference where U.S. President George Bush is asked about his policies at Guantanamo Bay by Bruce Springsteen, and responds to “the Boss” by musing:  “Who are you?”

What do you think the world might then say about Mr. Bush?

Well, precisely that happened last week when Yuri Shevchuk, the Russian equivalent of Springsteen and leader of the legendary rock band DDT, stood up and confronted Putin with the following question:  “I received a call the day before yesterday from your assistant, I guess — don’t remember his name — who asked me not to pose sharp questions.  Do you have a plan for the serious, sincere and honest liberalization and democratization of our country so state organizations do not strangle us and so we stop being afraid of the police on the streets?”

END_OF_DOCUMENT_TOKEN_TO_BE_REPLACED 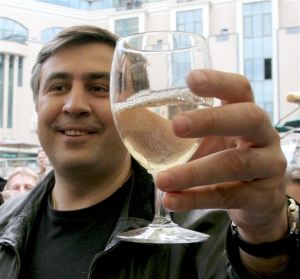 Voters from one corner of the nation to the other spoke with one voice and repudiated Russian aggression and imperialist efforts to bring Georgia back with in Russian domination in a massive landslide.

“No,” the people of Georgia boldly declared:  “We will be free!”

END_OF_DOCUMENT_TOKEN_TO_BE_REPLACED

Mickey Roarke as a Russian baddie in Ironman II

Vladimir Putin likes to hold himself out to the world as being a tough guy, a macho stud, but in fact he’s not just a girly man, he’s more like a girly little boy.

Case in point:  When Iron Man II opened in China — it’s yet another film, like The Bourne Supremacy or Eastern Promises or Indiana Jones or RocknRolla, that features a Russian villain as Russia descends once again into neo-Soviet darkness — the Chinese censored all the references to Russia.

END_OF_DOCUMENT_TOKEN_TO_BE_REPLACED

The Times of London‘s ace Russia reporter Mark Franchetti reports on the second high-profile refugee from the Sochi disaster in as many months (remember Sergei Volkov back in April?).  Those cracks in the foundation are getting pretty nasty, and it’s early yet.  How soon before this edifice comes crashing down?

A wealthy businessman involved in preparations for the 2014 Winter Olympics has blown the whistle on corruption at the heart of the Kremlin.

Valery Morozov, 56, a Russian construction entrepreneur, says he paid £4m in bribes to a senior official to secure a lucrative state contract for the games. His claims raise questions about Russia’s efforts to compete with England to host the football World Cup in 2018. Critics say that awarding the tournament to Russia would expose it to the country’s endemic corruption.

Morozov revealed that he had taken part in a police sting operation to expose the official. He later arranged for one of his employees personally to hand a letter of complaint to Dmitry Medvedev, the Russian president. Documents show that prosecutors in Moscow are now examining his claims. However, the Kremlin bureaucrat remains in place, raising concerns about a cover-up.

To protect his evidence, Morozov came to Britain earlier this year to lodge documents with his British lawyers and make a statement to this newspaper. “I turned to The Sunday Times because I understand that if the information I have stays only in Russia I am running a serious risk,” he said this weekend.

END_OF_DOCUMENT_TOKEN_TO_BE_REPLACED

Russia Profile translates Xenia Luchenko, editor-in-chief of the Tatyanin Den website, explaining how the Putin regime is creating a new generation of morons by brainwashing the youngest Russian citizens about their history:

My son recently brought a book home from school, which he said he had been assigned to read over the next two weeks. It was called “The Book to Read on the History of Our Homeland,” and was published in 1991. It has stories about the 17th century Cossack rebel Stepan Razin, a section entitled “How Workers Lived and Fought in Pre-Revolutionary Russia,” and an entire chapter called “The First Decrees of the Soviet Government.” There are pictures of Red Army soldiers with rifles, and the chapter “Lenin’s Arrival in Petrograd” is illustrated with classic images of Lenin on an armored vehicle, surrounded by a crowd waving red flags.

After putting this rubbish to one side, I had to explain to the boy what he should tell his teacher when she asks why he did not read the book. They wanted double standards, so let them have them.