Latynina on the Mine Explosion 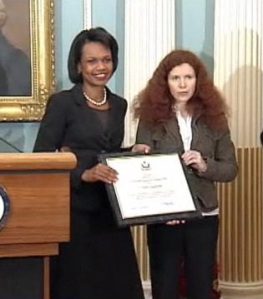 On the night of May 8-9 at the Raspadskaya coal mine in the town of Mezhdurechensk in the Kemerovo region, two huge explosions took the lives of 90 miners. Because the country was celebrating Prime Minister Vladimir Putin’s World War II victory that day, few paid any attention to the blasts. While Muscovites enjoyed the grandiose May 9 festivities, poor families in Mezhdurechensk mourned the loss of their loved ones.

After the tragedy, surviving coal miners and their families blocked a Siberian railway and clashed with riot police in Mezhdurechensk. After that incident, Kemerovo Governor Aman Tuleyev declared that they were not real miners, and that “enemies” were behind the protests.

The miners elected Tuleyev, a Communist, as governor during the chaotic years under former President Boris Yeltsin. Back then, when the miners blocked the railways, they were seen as working people protecting their rights. Now, under Putin’s power vertical, Tuleyev brands the miners as enemies of the people.

Miner strikes were common in the early 1990s, but once the mining sector was privatized, starting in 1998, the country had not seen strikes for 12 years. But the situation changed as a result of the crisis, and coal mining regions are now faced with problems directly linked to Putinomics.

The problem is that Russian miners earn about 67 percent less and pay double the amount for food than their counterparts in the West.

Why does food cost so much in Russian stores? The high prices reflect the direct cost to the economy caused by extortionists, who have multiplied and earned record profits during the Putin years. Like other large, profitable companies, Evraz must pay Putin’s bureaucrats large bribes and kickbacks to stay in operation, and these heavy “corruption taxes” are built into production costs at Raspadskaya.

The difference between ordinary Russians, who have to pay exorbitant prices for consumer goods, and Evraz, which has to pay exorbitant prices for licences and equipment, is that Evraz owner and billionaire Roman Abramovich can afford to pamper himself every now and then. For example, he just bought another luxurious chateau — the latest one in Nussdorf, near Vienna. It is also worth noting that Putin himself was seen standing on the veranda of that luxurious home during his visit to Austria in April. Just 20 days before the catastrophe in the Raspadskaya mine, we saw a wonderful picture: Putin was grinning from ear to ear on the veranda of a home Abramovich purchased with the money he saved by paying his miners miserly wages.

If your coal is sold for the standard price on world markets and the owner of the mine is forced to pay enormous bribes to state officials — and at the same time he wants to buy a luxurious chateau in Nussdorf — the only way to save money is by cutting the miners’ wages. To earn enough money to feed their families, the miners put wet rags over the methane sensors. Normally, the sensors would automatically shut down the mine when methane levels have reached dangerously high levels. But the wet rags shut down the sensors, not the mine, and as a result the entire mine is blown to pieces.

By dispersing protesters, Putin is placing wet rags on another sensor — the people’s anger.

37 responses to “Latynina on the Mine Explosion”