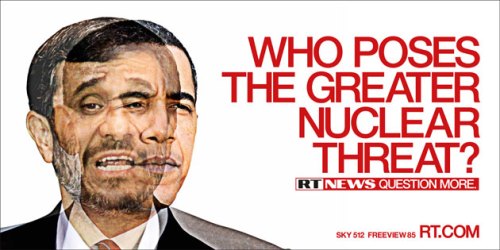 The Russians are coming! The always brilliant Luke Harding, reporting for the Guardian:

They are appearing in newspapers and on posters alongside major roads in Britain. There is Barack Obama’s head, on it superimposed the image of Mahmoud Ahmadinejad, Iran’s leader. The slogan reads: “Who poses the greatest nuclear threat?”

For many people the answer is clear – after all, Obama hasn’t so far called for Israel to “vanish from the page of time”. But for the Kremlin the Obama image is the latest step in an ambitious attempt to create a new post-Soviet global propaganda empire.

Two decades after the demise of Pravda, the Kremlin’s 24-hour English language TV channel, Russia Today (RT), is launching its first major advertising blitz across the UK. Dubbed North Korean TV by its detractors, the channel, available on satellite and cable TV, gives an unashamedly pro-Vladimir Putin view of the world, and says it seeks to correct the “biased” western view offered by the BBC and CNN.

“What we see as black and white might not be black and white. It’s making people question their own stereotypes,” Margarita Simonyan, RT’s 29-year-old editor-in-chief, explains. “We offer an alternative to the mainstream view.”

Certainly, RT’s advertising campaign is provocatively contrarian – casting doubt, for example, on climate change in the week of the Copenhagen summit, and comparing a British bobby to a tattooed football hooligan.

But is anyone actually going to watch it? “I don’t believe in unbiased views. Of course we take a pro-Russian position. The BBC says it openly promotes British values,” notes Simonyan.

Next year the Russian government will spend $1.4 billion (£866m) on international propaganda – more than on fighting unemployment. In January RT launches a Spanish service aimed at Latin America, a region of growing Kremlin geopolitical interest; RT already broadcasts in Arabic.

The Kremlin has trebled the budgets for its main state news agencies, Ria Novosti and ITAR-Tass, despite Russia’s deep economic crisis; there is a paid-for monthly supplement in the Daily Telegraph, Russia Now, and a revival of the Soviet-era radio station Voice of Russia.

The Kremlin employs two major PR agencies, Ketchum and GPlus, and in London uses Portland PR. And then there are the angry bloggers – a shadowy army of Russian nationalists who are active on western newspaper websites, including the Guardian’s Comment is free site. Anyone who dares to criticise Russia’s leaders, or point out some of the country’s deficiencies, is immediately branded a CIA spy or worse. “They [the Kremlin] are coming to realise that information matters and that control of information internationally matters even more,” says Evgeny Morozov, a Yahoo! fellow at Georgetown University’s institute for the study of diplomacy.

Morozov, who is writing a book on how authoritarian regimes are exploiting the internet, said the Kremlin was taking a more “aggressive” approach following last year’s war in Georgia.

The Russian government lost the PR battle over the conflict, at least initially, and failed to get its message across to shivering European consumers during two recent gas wars with Ukraine. “They have realised it is only by controlling what gets printed in the international media they can advance their hard policy agenda items,” Morozov says. Current Russian aims, he says, include thwarting Nato expansion and winning recognition for Moscow’s puppet states of South Ossetia and Abkhazia.

Morozov takes a dim view of RT – pointing out that it has a predilection for fringe guests and discredited conspiracy theorists. “For me it’s a comedy channel. You watch it to see how badly mangled Russia’s attempts at influencing foreign opinion are,” he suggests, adding that Russia has moved from Pravda to Pravda 2.0.

Insiders at RT praise the professionalism of the staff. It includes several British journalists and newsreaders. “Generally people there are pretty talented,” one former employee said. “But nobody is under any illusions as to what it’s all about. There is such a lack of objectivity. It’s like North Korea TV.”

RT enjoys more freedom than Russia’s domestic state-controlled channels. But while there is sometimes broad-based criticism of the regime, there is an unspoken understanding that you cannot criticise Putin, the ex-employee said.

Other sources familiar with the Kremlin’s PR strategy say that there is a lingering misunderstanding among top Russian officials as to how the western world works. “They think it’s enough to have good PR and that this is sufficient to act as a counterweight to the bad publicity caused by events in Russia,” one said. “Obviously it isn’t.”

Asked how the Kremlin could improve its image in the west, he replied: “They could stop beating up opposition demonstrators for a start.”

In the long run, however, the PR strategy may pay off. More and more newspapers are closing their bureaus in Moscow, and the number of foreign correspondents covering Russia is dwindling.

Some observers believe that over the next decade the Kremlin’s growing internet presence is likely to spill over into the western mainstream. Simonyan insists that RT is not mere government propaganda. Instead, she says, western reporters often have such “strong opinions” that they “fail to see the truth” about life in Russia. “We don’t believe we live in a country where everything is bad,” she says, speaking from RT’s gleaming offices in central Moscow. Wall screens broadcast RT, the BBC and CNN; clocks show the time in Moscow, New York and London; journalists sit in an open-plan office amid a soft hum of Russian and English.

Given the bad blood between London and Moscow, and the unresolved feud over the murder of Alexander Litvinenko, does she really think RT can find an audience in Britain? “People will be surprised at how much there is in the world that they haven’t been told before,” she says.

This entry was posted in propaganda, russia and tagged russia. Bookmark the permalink.

38 responses to “Russia spends more on Propaganda than Unemployment”