A Double-Dip Recession for Putin’s Russia?

“The economy has grown by an average of 0.5 percent per month over the last five months.  I’m counting on these positive trends in economic development becoming more significant in the middle of next year.” 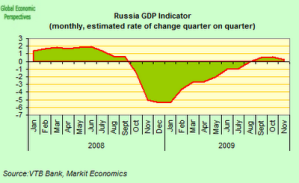 Is Russia heading for a double dip?

The brilliant Russia economist Edward Hugh, blogging at Eastern European Economy Watch, offers a wealth of data indicating that Russia is heading for a double-dip recession which may well send the Russian economy into another massive tailspin. Should the price of oil fall again, this time it could easily be fatal.

Russia’s Capital Total Activity Index and GDP Indicator both saw turnarounds in their growth patterns of previous months, and began heading back for negative territory while the Russian Manufacturing PMI index remained in negative territory for a second straight month, and was worsening.  Hugh writes that “the quarter-on-quarter [GDP indicator] rate [shown in the chart above] slipped back to a bare 0.2%, treacherously close to the dividing line between contraction and expansion.”

The outcome is not surprising when we take into account that November saw an overall deterioration in business conditions in Russian manufacturing for the second month running. Output rose only marginally, while incoming new orders fell for the first time since June. Growth of purchasing activity was maintained, but at a slow pace, while employment continued to fall.

The headline seasonally adjusted Russian Services PMI came in at 53.3, down on the 54.3 registered in October, and well below the historic average of 56.9, highlighting the fragility of the Russian recovery. Restricted credit continued to be a theme in this months survey responses, although sector data pointed to a stronger rise in financial intermediation activity. The rate at which incoming new business increased slowed during the month and contributed to additional spare capacity at service providers and a faster decline in outstanding business. Backlogs of work have contracted every month since September 2008, and the latest rate of decline was at the most rapid rate since July.

All this is only to be expected from an economy so utterly lacking in basic fundamentals as Russia’s.  The only “progress” that the Russian economy has made under Vladimir Putin is that the price of crude oil has spiked up.

This entry was posted in economics, editorial, neo-soviet failure, russia and tagged russia. Bookmark the permalink.

8 responses to “EDITORIAL: A Double-Dip Recession for Putin’s Russia?”