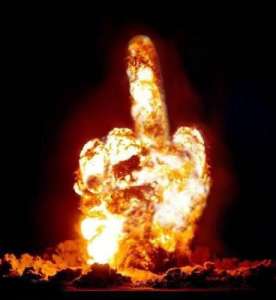 In neo-Soviet Russia, they give themselves the flaming finger.

It’s ironic indeed that Russia is so inflamed by hatred of foreigners, because it is Russians, not foreigners, who are the real danger to Russian people.

Just days ago, we reported on a the terrorist bombing of a luxury (by Russian standards) high-speed train halfway between Moscow and St. Petersburg. At least two dozen Russians were killed by these home-grown terrorists.

But they were small thinkers.  Late Friday evening on the other end of the country, in the city of Perm in Siberia, a massive explosion rocked a nightclub and killed at least 100, perhaps four times or more as many as the terrorists had claimed.  Half again as many were injured.  And these killers were not terrorists in the traditional sense; they were simply ordinary, reckless Russian citizens literally playing with fire.

The Russophile rats will try to rationalize this atrocity by saying that nightclub disasters have occurred in other supposedly more advanced countries like those in Europe or North America.  True enough.  But it’s Russia that does not rank in the top 130 nations of the world when ranked for adult lifespan, not them.  Russian is one of the most dangerous places on the planet for a human being to be, especially if he’s unlucky enough to be a Russian.  Russia has one of the world’s highest murder rates and Russians are far more likely to be killed by vehicle or fire than the people of any other nation on the planet.  For this reason, Russia’s birthrate is unable to keep pace with its mortality rate, and the country is quite literally going extinct.