(1)  EDITORIAL:  Russia on the Verge of Religious War

(2)  EDITORIAL:  Russia on the Verge of Energy War

NOTE:  Kim Zigfeld’s latest column on the Pajamas Media megablog addresses the horrifying murder of Sergei Magnitsky while interned in the neo-Soviet gulag.

EDITORIAL: Russia on the Verge of Religious War

Russia on the Verge of Religious War

From his earliest days in the Moscow Kremlin, Russian dictator Vladimir Putin’s chief claim to fame has been that he brought peace to Russia’s relations with Chechnya and its growing Muslim population (it’s predicted that within the next century Russia will become a majority-Muslim nation).

That absurd propagandistic lie got yet another harsh jolt of reality last week when Orthodox Priest Daniil Sysoyev, Russia’s most active proselytizer in the Islamic world, was shot dead in Moscow.  Sysoyev crusaded to bring Orthodox Christianity to the Russia’s Tatar region, and aggressively confronted Russia’s Wahabi Islamic sect with his Christian views.  He had written, for example:  “In contrast to the opinion of many  both the word of God and the rules of the Church condemn marriages between Christians and followers of other faiths.”  One Russian Orthodox clergy leader responded:  “Father Daniil, his message, and martyr’s end will become a symbol of the rebirth of missionary activity of our Church.”

It appears, then, that the forces of Islam have now struck back, and that Putin’s Russia stands on the brink of holy war.

END_OF_DOCUMENT_TOKEN_TO_BE_REPLACED

EDITORIAL: Russia on the Verge of a New Energy War

Russia on the Verge of a New Energy War

Once again, Vladimir Putin’s Russia has proved itself wholly unable to carry on productive, friendly relations with its nearest neighbors.

Last week, in response to libelous, provocative unilateral Russian threats to shut down gas supplies in the event of payment default or “theft” of gas,  Ukraine announced that “it would double the fees that Russia must pay to transport natural gas through Ukrainian territory to the rest of Europe.”  Russia called the announcement “political blackmail,” yet Ukraine has not been late on any payments to Russia this year and there have been no allegations of siphoning.

Russia’s crude threats are the same ones the world heard last year, and Ukraine’s response was predictable as well.  The reasons for Russia’s aggression against Ukraine are perfectly clear.

END_OF_DOCUMENT_TOKEN_TO_BE_REPLACED 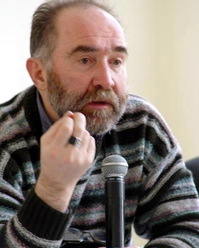 A well-known Russian journalist, head of the Center for Journalism in Extreme Situations  Oleg Panfilov in early November moved for permanent residency from Moscow to Tbilisi. In a conversation with journalists he explained that his decision was based on the fact that in Russia unknowns were constantly threatening him through the internet with physical lynching.

This news appeared on the internet on the 9th of November. To me this «news» was known two months ago: Oleg himself had told me about his desire to forsake Russia. In so doing no arguments in the form of threats did he name. I think that in this situation, unnamed colleagues were inaccurately treating the essence of the event.

Oleg told me that he intends to live in Georgia and to read lectures at the journalism school in the Tbilisi state university, as well as to actively cooperate on the “Caucasian telechannel”  being opened as of the new year in Tbilisi, which, presumably, will broadcast to the whole Caucasian region.

END_OF_DOCUMENT_TOKEN_TO_BE_REPLACED

Everyone knows that Russia is corrupt, but did you know just how corrupt? The short answer is: more than any other country. That, at least, is the conclusion of a survey just published by PricewaterhouseCoopers, which examines the level of economic crime around the world.

PwC canvassed more than 3,000 companies in 55 countries, 89 of them in Russia. It asked them if they had been the victim of frauds such as embezzlement, bribery and crooked accounting. Russia topped the list, with 71% of respondents reporting at least one instance of fraud during the previous twelve months.

END_OF_DOCUMENT_TOKEN_TO_BE_REPLACED

Once again, Russia has found itself at a crossroads. The reason may not seem all that significant in itself: After the recent restoration of the gaudy Kurskaya station on the Moscow Metro, there appeared for the first time in half a century, in full view of all the passengers, the word “Stalin,” which was implanted in the underground ensemble in a line from the national anthem of his time glorifying the leader of all peoples. Thus did Stalin’s ghost come back to haunt not only the Metro, but all of Russia.

This appeared as a Rubicon. To cross it would be to start anew on the whole glorious path of Soviet imperialism. But President Dmitri Medvedev, in his last two broadcasts over the Internet, tried to blow up the bridges.