The river of opposition blood continues to flow freely in the Russia ruled over by proud KGB spy Vladimir Putin.  On Wednesday, Sergei Magnitsky perished in the Kremlin’s neo-Soviet gulag and the day before Ivan Khutorskoy was shot down on the Moscow streets outside the prison where Magnitsky breathed his last.

The 37-year-old Magnitsky (pictured, left) had been jailed a year ago on tax fraud charges relating to his involvement with William Browder’s Hermitage Capital firm, who he represented as an attorney. When he refused to provide incriminating testimony against Browder, who’s apparently the new Mikhail Khodorkovsky but fortunate enough to have fled the country, Magnitsky was slowly tortured to death by being denied medical treatment and basic sanitary conditions.

Khotorskoy (pictured below, right) was an ardent campaigner against the rise of the Russian neo-Nazi movement, which of course is closely tied to the Kremlin’s own personality cult, and a close ally of murdered attorney Stanislav Markelov. 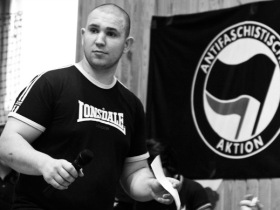 It’s yet another new low for the Kremlin.  Even as it attempted to open a foreign investment forum in Chicago designed to induce foreigners to trust the Russian marketplace, the lawyer for one of Russia’s biggest foreign investors perishes in custody on obviously bogus, politically-motivated charges and all the major American newspapers were picking up the story.  It’s incompetence on a truly  neo-Soviet scale, combined with morality that makes it clear the USSR never really disappeared.

The murders that began as soon as Vladimir Putin entered the Kremlin halls, starting with Galina Starovoitova, continue apace.  And why shouldn’t they?  U.S. President Barack Obama says and does nothing about them, and the Kremlin not only silences critics with each killing but terrorizies others into silence as well.  Ultimately, however, this tactic did not work for the USSR and it will not work for Russia either.  But the cowardly silence of the Western governments means that there will be much suffering before the crumbling edifice that is neo-Soviet Russia collapses just like its predecessor.

The following is a press release from Hermitage Capital:

Sergey Magnitskiy was refused bail and kept in detention for a year without trial. Yesterday, Sergey’s lawyers came to see him at a planned investigative procedure at Butyrka detention center and were denied access to him. The lawyers were told Sergey could not leave his cell because of his state of health. Investigators Oleinik and Silchenko refused to show a medical report about Sergey’s health to his lawyers, stating it was an “internal matter”.

Sergey’s lawyers were told that Sergey Magnitskiy died of a rupture to the abdominal membrane around 9:00 pm on 16 November 2009 and that his body was transferred to the 11th Morgue in Moscow.

Sergey Magnitskiy was kept in pre-trial detention for a year and denied by Investigator Silchenko the ability to see his mother and his wife and speak to his children for the entire time of his detention. He was transferred between four detention centers and his detention conditions progressively deteriorated. Numerous complaints by Sergey Magnitskiy and his lawyers about the physical and psychological pressure exerted on him, the legal breaches during the pre-trial investigation, the obstruction to his defence and the inhuman and degrading conditions in detention, were left unaddressed.

Additionally, Sergey Magnitskiy wrote a 40-page complaint to General Prosecutor Chaika describing a serious medical condition which developed in detention, the on-going and regular denial of medical treatment which resulted in a serious worsening of his health, and pleaded for access to medical attention. There was no response to his complaint.

“I would like to express my shock and sadness at the passing of Sergey Magnitskiy. Sergey was a brilliant and honourable lawyer known by all whom met him as a diligent professional and a committed family man. I know I speak for all the staff of Hermitage Capital when I say that both Sergey and his family are in our hearts at this time. He and the ideals he stood for will not be forgotten,” said CEO of Hermitage Capital William Browder.

Lawyers will conduct an independent investigation into his death.