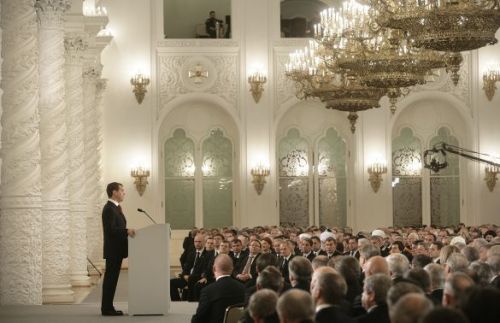 As Russian “president” Dima Medvedev stood to deliver his second “state of the union” message last week, barely taller than his lectern, we couldn’t help but think it quite likely that one of the main reasons he was chosen to take up his post is that he isn’t any taller than Russia’s real ruler, Vladimir Putin.  We carry an editorial cartoon in today’s issue from the ever-brilliant Sergei Yelkin which captures Medvedev’s true stature with more eloquence than any words could ever do.

END_OF_DOCUMENT_TOKEN_TO_BE_REPLACED 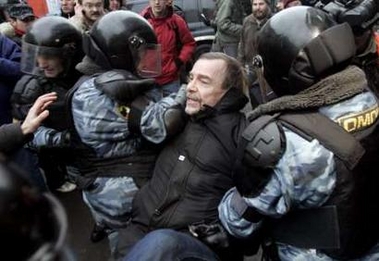 Moscow city officials are refusing to renew the leases of two leading Russian human rights activist groups, an action that the groups are appealing but that some observers are explaining as official retribution for the participation of these groups in recent anti-government protests and as a reflection of negative trends in Russian life.

Yesterday, Lyudmila Alekseyeva, the dean of Russian human rights activists and the head of the Moscow Helsinki Group, said that Moscow city officials were refusing to extend the lease the Group has for offices in the Russian capital. Lev Ponomaryev, head of the For Human Rights Movement, said officials had taken the same action against his group.

Both of them have appealed to Vladimir Lukin, the Russian government rights activist, and Aleksandr Muzaykantsky, Lukin’s Moscow city counterpart, as well as to Ella Pamfilova, the head of President Dmitry Medvedev’s Council for the Support of the Development of the Institutions of Civil Society and Human Rights.

END_OF_DOCUMENT_TOKEN_TO_BE_REPLACED

Medvedev and his Lies

Nikolai Zlobin, director of Russian and Asian programs at the Institute for World Security in Washington, writing in the Moscow Times:

During his perfunctory election campaign, President Dmitry Medvedev made no mention of the need to modernize Russia, nor did he promise to become a popular video blogger or to set any world records for compassion by providing apartments to World War II veterans. No, Medvedev called for a battle against corruption and promised to do so much in establishing law and order that everyone would understand that he was not just keeping the presidential seat warm until Prime Minister Vladimir Putin returned to it in 2012.

Russians — tired of small-scale corruption that has become a way of life and daily injustice on the part of government officials — were ready to believe the anti-corruption pluck of the young leader who promised to “finally put an end” to the problem.

END_OF_DOCUMENT_TOKEN_TO_BE_REPLACED

The denunciation of criminality in the militia by Kuban MVD Major Dymovsky on YouTube and the appearance of clips by two other former interior ministry officers threatens to “awaken” Russian society more than any other development since the recovery of stability earlier in this decade, according to numerous Moscow commentators. And while the suggestion of some that the MVD may be the unexpected source of “an orange revolution” in Russia are an overstated reaction to regime propagandists who have suggested that the West is behind the major, there can be no doubt of the attention these YouTube appearances are gaining.

One commentator, Dmitry Bykov, argued that “the popularity of the Kuban major is comparable to the mechanism of the glory of Maxim Gorky” a century ago. At that time, he says, “everyone knew that the people were becoming impoverished and suffering but for the first time, someone from that milieu was telling them about it.”  Dymovsky has not appeared at a time when he can lead a struggle with “the system,” Bykov continues, but “like Solzhenitsyn who wrote down the testimony of the zeks, [the YouTube celebrity] is collecting “testimony’ of the ‘ments,’ who have suffered from the actions of the bosses” and his story is a compelling one.

END_OF_DOCUMENT_TOKEN_TO_BE_REPLACED

A Witchhunt in Omsk

In his classic novel of the purges, “The Case of Comrade Tulayev,” Victor Serge describes the way in which officials picked up on hints from their Stalinist superiors, often went further than even the latter intended, and because the system could not stop, set a new and more frightening standard of behavior for all.

Something similar appears to be taking place at Omsk State University. There, according to the “Otkryty Omsk” portal, administrators, working together with local militia officials, have compiled “an extremists’ list” on which figure not only those who have taken part in public protests but also those who have complained about the food.

END_OF_DOCUMENT_TOKEN_TO_BE_REPLACED 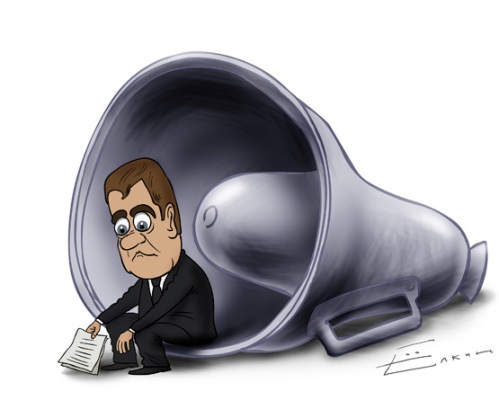 Medvedev the dwarf, a true work of cartooning genius from Sergei Yelkin, better known as Ellustrator.