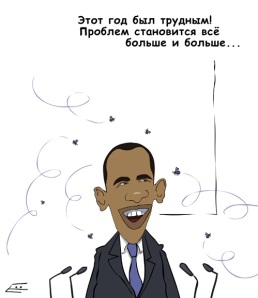 Obama, famous on YouTube for flyswatting says: "This year was a tough one. More and more problems every day." Source: Ellustrator.

Last Tuesday must have been rather disturbing for the denizens of the Russian Kremlin.

American voters helped the Republican Party adminster a “humiliating” beat-down of the Democrats in gubernatorial elections in New Jersey and Virginia, both states Barack Obama easily carried last year in his presidential bid.  The humiliation for Obama was especially intense in New Jersey, an overwhemlingly “blue” state that hadn’t seen Republicans in the statehouse in ages, a state Obama won in a landslide and where he campaigned actively for the Democratic incumbent.  And the Republicans didn’t just win, they won in absolutely dominating, blowout fashion.  It seems that reports of the GOP’s demise were greatly exaggerated.

These results would have the Kremlin heads spinning for two different reasons.

First, the very notion of a party opposed to the center sweeping to power in regional elections is utterly anathema to the Kremlin.  It has seized total control over such polls, and handpicks regional leaders, claiming that pluralism only results in weakness and national decline.  Yet there is America, the world’s only superpower, with a GDP ten times the size of Russia’s and a population twice as great, practicing pluralism to the Nth degree.

And then there’s the fact that Obama’s foreign policy has been full of appeasement towards Russia.  It can’t make the Kremlin feel to comfortable to see America’s Chamberlain being so viciously repudiated at the voting booth.  What’s more, as we report below it seems Obama’s top Russia advisor, Michael McFaul, was criminally misquoted by the Kommersant newspaper a few weeks ago, and in fact never asserted that the Obama administration would back away from pressuring Russia on human rights.

The Kremlin will simply never understand the power of democracy, or more importantly the weakeness of dictatorship.  The craven denizens of the Russian Kremlin cannot wrap their minds around pluralism, vesting a nation’s citizens with actual power and responsibility and freedom of choice.  The Kremlin, you see, views the people of Russia more like cattle than human beings, and believes that if they made decisions the country would go straight into the crapper.

It’s ironic, of course, because that’s exactly where elitism and autocracy has driven Russia time and again over the past century, so that now Russia is a hollow relic of a country on the verge of total exinction.