(1)  EDITORIAL:  The Horror of Neo-Soviet Russia

(4)  Putin, his Inflation and his Lies

EDITORIAL: The Horror of Neo-Soviet Russia

The Horror of Neo-Soviet Russia 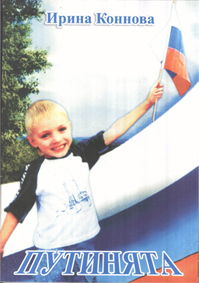 Two reports from opposite sides of European Russia last week, one from The Other Russia and one from FinRosForum, depict the true horror of the neo-Soviet state being built by proud KGB spy Vladimir Putin.

Russia watchers well remember the horrifying specter several years ago of a ghoul-like Putin, in full view of cameras and in broad daylight, pulling up the shirt of a little boy he had never met and kissing him on the stomach.  Now, Putin intends to express his love for children in a more literary manner.   As shown above, a publisher in Saratov (near Kazakhstan) is releasing a book called “Putinyata,” which combines the Russian dictator’s name with the word for “boys.”  It’s full of poems just like those that were written about Stalin and Lenin in Soviet times, and is meant to be read by children. The poems are about the heroic patriotism of Vladimir Putin (with praise for Lenin and Stalin thrown in for good measure).

END_OF_DOCUMENT_TOKEN_TO_BE_REPLACED

EDITORIAL: Mr. Medvedev and his Shoe

Mr. Medvedev and his Shoe

Soviet premier Nikita Khruschev found one uniquely Russian use for a shoe, and now it seems Russian “president” Dima Medvedev has found another.

To commemorate Russia’s national holiday to remember victims of Soviet repression, Medvedev wrote on his blog:

Even now we can hear voices saying that these numerous deaths were justified by some supreme goals of the state. Nothing can be valued above human life, and there is no excuse for repressions.  It is important to prevent the justification, under the pretext of putting historical records straight, of those who killed their own people.

In other words, he planted his shoe firmly in his own mouth.

END_OF_DOCUMENT_TOKEN_TO_BE_REPLACED

The Killled him but He walks Among us

Translated from the Russian by The Other Russia

On Sunday, October 25, 2009, in the North Caucasian city of Nalchik, one of the most influential people in the Republic of Ingushetia was killed – Maksharip Aushev; the killers peppered his car with machine guns. It happened on the day after Maksharip appeared on Marianna Maksimovskaya’s REN TV news show and gave a piercing indictment of former republic president Murat Zyazikov.

“Nobody has established yet who to suspect,” said Yakhya Aushev, Maksharip’s father. “You could get bogged down in the fact that he just recently was speaking out against Zyazikov. Not long ago, a team from REN TV was photographing their [the Zyazikovs’] mansions, and there was an incident with Ruslanbek Zyazikov. It was as if there were forces hunting him down.”

END_OF_DOCUMENT_TOKEN_TO_BE_REPLACED

Putin, his Inflation and his Lies

Translated from the Russian by The Other Russia

If you believe the government statistics, then we have had no inflation since August. It ended. Just as it piled up from January through July, it has stopped in the past few months. Even our enemies at The Wall Street Journal admit it: “Recession quells inflation.”

And that’s not all. Prices won’t rise any further as well. At least, that is, through the end of December. This prediction came out easily from the words of Prime Minister Putin at the Russian-Finnish Forestry Summit: “You know that we are striving for a reduction in inflation… This year already it will be, perhaps, a bit more than 8 percent…”

END_OF_DOCUMENT_TOKEN_TO_BE_REPLACED

Moscow and Russia’s regions are now on a collision course, one in which the regions, in many cases devastated by the economic crisis, need more resources and authority to cope, are confronted by a central government which is further tightening control over revenues even as it holds regional leaders responsible for solving problems in their areas.

Most commentators on the situation in Russia have focused either on the problems of individual company towns – the so-called Pikalevo problem – or on the economic situation in the country as a whole. But statistics published by Russian state statistics administration yesterday highlight just how differently the economic crisis has hit different regions.