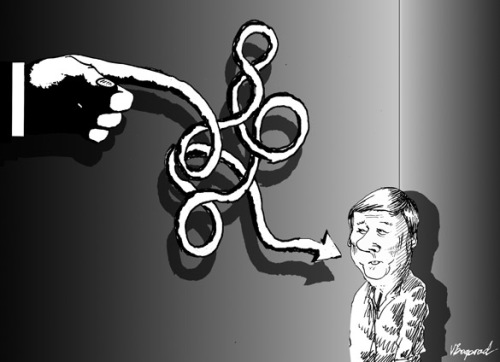 There’s a funny episode of the TV show South Park in which the townsfolk sing a song entitled “Blame Canada” and seek to explain all their troubles by reference to our funny-talking neighbor to the north.  In Russia, they often blame South Park itself, rather than Canada, and ban the programs.  But far more common practice is to blame Anatoly Chubais.  In Georgia Bovt’s latest Moscow Times column, he explores the phenomenon.

On Saturday, the Federal Service for Environmental, Technological and Atomic Inspection released its report on the causes of the Sayano-Shushenskaya hydroelectric plant accident that occurred on Aug. 17. Former Unified Energy System CEO Anatoly Chubais was the most recognizable name in the “most-guilty” list.

Chubais’ presence on the list is not surprising when you consider that the Sayano-Shushenskaya investigation efforts are headed by Deputy Prime Minister Igor Sechin, who also oversees the government’s energy sector. Sechin, who served as former President Vladimir Putin’s deputy chief of staff, was one of the strongest opponents of Chubais’ energy reforms when Chubais headed UES. Thus, it is impossible not to see in the report’s findings evidence of a serious political game among Russia’s bureaucratic elite.

In the report, the plant’s immediate supervisors, owners or operators were not found liable for the accident. Instead, the guilty verdict fell on those in the energy sector who “created the conditions” for the Sayano-Shushenskaya tragedy to occur. In 2000, Chubais, in his capacity as UES chief executive, signed off on documents to start operations at Sayano-Shushenskaya, although the plant had been operating without these documents since 1978.

Was it known to Chubais — as well as his advisers and the specialists who had personally tested the station — that the plant had technical problems since the first day of operations? Did Chubais know that approving a fundamentally defective project would come back to haunt him? Of course, everybody closely involved with Sayano-Shushenskaya knew of the dangers involved, and that is why the plant never worked at full power until 2000 and why the water level in the reservoir above the plant was always kept lower than originally planned.

The original engineering plans were designed in the 1970s. The defective design plans for Sayano-Shushenskaya were just a small subset of the overall defective and dysfunctional Soviet economy as a whole. The reason the Soviet bureaucrats gave the order to build the Sayano-Shushenskaya hydroelectric plant in Khakassia in southern Siberia was to provide energy for the aluminum industry in that remote part of the Soviet Union, despite the fact that the aluminum factories were located far from any seaports and raw-material sources. Like so much of the Soviet economy, military considerations were paramount: They wanted to build strategically important aluminum plants in an area that the enemies would have trouble reaching. Maybe it was the Soviet leaders more than anyone else who “created the conditions” that led to the Sayano-Shushenskaya accident.

Imagine for a second if Chubais refused to sign off on the plant’s operation in 2000. It would have led to severe energy shortages for the country’s leading industrial champions, military installations and residential neighborhoods. And again, Chubais would have been blamed.

Inspectors had checked the Sayano-Shushenskaya plant several times since 2000 — the most recent government inspection was last year — and no major safety or technical violations were ever found. Unfortunately, Russia’s leaders and bureaucrats think about the design defects of a building or plant only after an accident occurs. And then, depending on the prevailing political climate, either a minor functionary — or a top chief — is pinned as a scapegoat for the incident. Moreover, whenever action is ultimately taken, it usually has nothing to do with correcting the defect in the system and everything to do with settling political scores.

As a result of the findings in the report, can we expect punishment for the guilty parties? Not likely. One law enforcement source has already responded to the report’s accusations and announced that “only checks ordered in the course of the official investigation will be decisive in the case.” And those findings are unlikely to demonstrate a direct cause-and-effect relationship between Chubais’ signature in 2000 and the fact that the bolts holding down the lid of the plant’s second turbine unit were poorly secured — the immediate cause of the Aug. 17 accident.

A more useful investigation of the accident should more closely examine Russia’s economic policy — a policy that is destroying the country’s entire infrastructure, almost all of which was built during the Soviet era. This analysis should also focus on the effectiveness of the country’s educational system in preparing a qualified technical work force.

The other contributing factor behind the Sayano-Shushenskaya that cannot be ignored is corruption. The private firm responsible for repairs and technical maintenance at the facility was affiliated with the plant’s directors. These conflicts of interests between affiliated private companies and the government are a widespread problem in Russia. Who is responsible for this? Unfortunately, I doubt that the Federal Service for Environmental, Technological and Atomic Inspection or any other agency has the courage to give a full and complete answer to that question.

This entry was posted in corruption, russia and tagged chubais, russia. Bookmark the permalink.

One response to “Blame Chubais!”