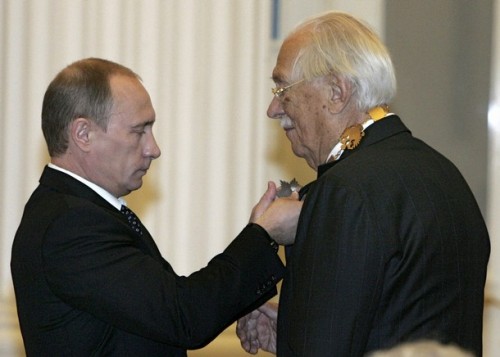 Have fun in hell, Mr. Mikhaikov!

Mikhailkov lived 36 years longer than is average for a Russian man — half an additional Russian lifetime, equivalent to an American man living to 120 —  because he was coddled throughout the Soviet era by the totalitarian dictatorship he served so faithfully.  Daring to call himself a writer, Mikhailkov denounced and condemned Alexander Solzhenitsyn and Boris Pasternak.  Showing them how to write properly, he penned the lyrics to the national anthem of the USSR, lyrics meant to praise the greatest mass murderer of Russians who ever lived, Josef Stalin. Therefore, of course, proud KGB spy Vladimir Putin not only gave him a medal but chose him to rewrite the anthem, to the same tune, when the USSR collapsed.

In his wretched lyrics for the anthem, Mikhailkov wrote that the USSR was indestructible and would live forever; his language may have inspired the lunatic despot Nikita Khruschev to take off his shoe at the United Nations and make a similar exclamation.  He called Stalin a Great Leader who, inspired by “faith in the people” was able to “inspire Russians to build the land they love.”  He analogized Stalin to “the bright sun of freedom.”

One does not know whether to laugh or vomit.  A person of any character, upon seeing the entire edifice of the USSR collapse into dust within a few decades, and upon then seeing the true facts about Stalin’s horrific bloodletting revealed, would have crawled under a rock or simply blown his brains out. But Mikhailkov did no such thing. He went right on merrily sucking up oxygen until his own life vastly exceeded that of the indestructible USSR, and wrote another set of national lyrics just as utterly ridiculous and doomed as the first.

Mikhailkov, in other words, is Russia in microcosm.  He was a foul, pollluted, diseased, nasty little carbuncle on the buttocks of the world who contributed mightily to the untold suffering of millions, and he was proud of it.  He blithely ignored reality, and just as blithely helped lead his country to absolute destruction.

This entry was posted in history, russia, russophiles and tagged russia, Sergei Mikhailkov. Bookmark the permalink.

15 responses to “Obituary: Have fun in Hell, Mr. Mikhailkov”