(4)  Photo Essay:  It Seems Putin is no Music Lover

NOTE:  Kim Zigfeld takes on Conde Nast and GQ in her most recent installment of her Russia column over at Pajamas Media (now 37 columns strong).  Needless to say, they don’t stand a chance.  It’s the third time Kim has had the lead item at the superblog.

NOTE: The bleak news coming out of Russia can be depressing sometimes, and looking for good news from Russia as consolation is like looking for a needle in a haystack.  So let’s look at Mt. Bosavi in Papaua New Guinea where in the crater of an extinct volcano has been discovered an entire new world of never-before-seen creatures that have evolved in isolation for 200,000 years. The photos are breathtaking, and remind us that anything is possible. Even democracy in Russia, however unlikely it may seem.

The Moscow Times has made an impressive major reworking of its website design, and part of it allows the mighty little paper to publish larger photographs and images, such as the brilliant editorial cartoon show above which captures the fundamental dishonesty of the Russophile hoards who rabidly seek to defend the Putin regime from its obvious and endless economic failures that have brought the nation to its knees.  Their ridiculouse lies hide the truth only from the lemming-like people of Russia themselves, while the rest of the world gapes in horror and pity.

The cartoon accompanied an editorial from the Vedemosti newspaper that is published with assistance from the Moscow Times and which is one of Russia’s last remaining bastions of real information — though like all the others it is ready a perilous few.

END_OF_DOCUMENT_TOKEN_TO_BE_REPLACED

Writing on the Open Democracy network Russian journalist Vladimir Tupikin says that the Putin regime is dancing to the tune of the country’s neo-Nazi movement:

On Tuesday 4 August 2009 the St. Petersburg City Court examined the appeal in the case of Alexei Bychin, a young anti-fascist arrested in the summer of last year. According to witnesses, the trial lasted around three minutes and upheld Bychin’s sentence: five years in a maximum security prison. From three to five, as people say in jest. But this time the story isn’t funny at all.

At the beginning of the white nights season in the middle of June 2008, a group of young punk rockers were walking around in the centre of Petersburg. Among them was Alexei Bychin, who had the ironic punk nickname Tolsty (Fatty), because he is thin and small (50 kg, 165 cm). There were girls in the group too.

END_OF_DOCUMENT_TOKEN_TO_BE_REPLACED

An independent election-monitoring group criticized election officials Monday for refusing to register all but one opposition candidate for next month’s Moscow City Duma elections, saying none of them would have won seats even if they had run.

“If elections were held according to European standards, these candidates could have become deputies,” Golos election monitor Andrei Buzin said at a news conference.

END_OF_DOCUMENT_TOKEN_TO_BE_REPLACED

Photo Essay: It Seems Vladimir Putin is no Music Lover 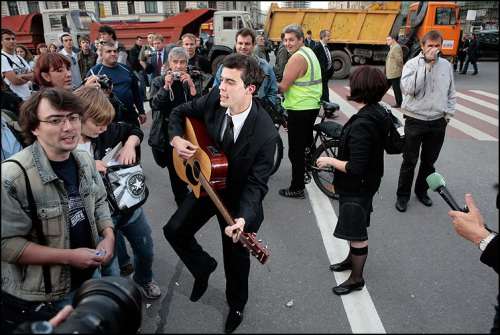 It seems Russian “prime minister” Vladimir Putin is no music lover. Above is opposition leader Roman Dobrokhotov strumming on his guitar at an August 31st rally in Moscow. Care to guess what happened next?

END_OF_DOCUMENT_TOKEN_TO_BE_REPLACED 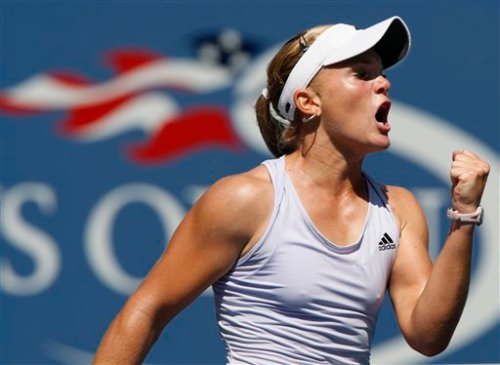 The mighty Oudin, slayer of Russians

If you learned that a 17-year-old American ranked well outside the world’s top 65 players went deep, deep into the draw at the year’s final grand slam event, the U.S. Open in New York, it probably wouldn’t surprise you a bit, would it, to learn that each and every one of her matches prior to the quarter finals came against Russian  opponents, whom she cut down as if they were feeble shoots of wheat beneath her sharpened deadly scythe, regardless of their ranking?